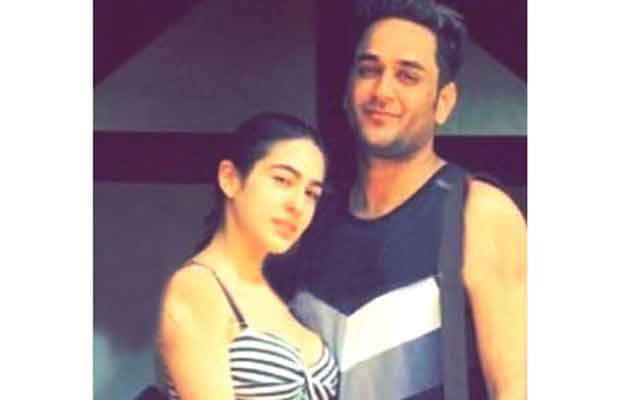 Producer Vikas Gupta posts a picture of his with Sara Ali Khan Flaunting A Bikini; deletes the post soon after.

The Bollywood actor Saif Ali Khan and his ex-wife Amrita Singh’s daughter Sara Ali Khan has created quite a buzz in the industry even before setting her first step in here. As much as the star kid is being talked about her probable debut films, she is being equally talked about because of her relationship rumours and also her beautiful pictures that crop up often on the internet.

Recently, the girl was spotted with the famous producer Vikas Gupta in a suburban hotel. Interestingly, the pretty lady was sporting a bikini and was seen posing with the producer for a picture.

Sara was looking extremely hot in that two piece black and white striped bikini. Vikas shared this picture on his Instagram handle with the caption, “Weekend at Marriot . Meeting old friends & New . It was a superb time . #Swimming #Meetings #Dinners and conversations and some alone time with Myself . #Gratitude.”

As soon as the photo was shared, it went viral on the internet. But to our amazement, the photo went missing soon after. Yes, it obviously means that it was deleted by the producer himself. Well, we wonder what made the producer share this picture and then delete it himself!

Talking about Sara Ali Khan, she was earlier rumoured to be roped in by Karan Johar opposite Tiger Shroff for the sequel of Student Of The Year. But now there are also reports that Salman Khan might be launching her with his brother-in-law, Ayush Sharma.