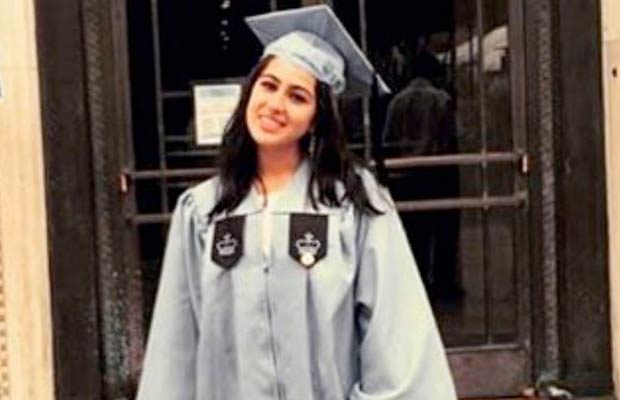 [tps_footer]Seems like off late, more and more celeb kids are entering Bollywood with super expensive ‘dream launches’. Be it Athiya Shetty or Alia Bhatt – they all have the perfect movie to enter the industry to try their hand at the profession that made their parents famous. Well, after the likes of Shraddha Kapoor, Varun  Dhawan and Sonam Kapoor – the rumored new kid on the Bollywood block is none other than Saif Ali Khan’s daughter Sara Khan.

Well, before you start doing a gig out of happiness let us tell you that Sara has just graduated from Columbia University a while ago and yes, she is a graduate! As is the case with most star kids, we assume that she too will be gearing up for a dream debut soon enough. In an interview, Shah Rukh Khan has said that he won’t allow his kids to get into films unless they are at least graduates. Well, Sara is a graduate now so we don’t think papa Saif would mind her stepping into Bollywood.

For a long time, there were rumors that Sara would be making her Bollywood debut soon. Speculations by industry insiders even suggest that Dharma Productions owner Karan Johar would launch this royal lady under his banner with his much anticipated sequel of ‘Student Of The Year’. Seeing how Alia Bhatt’s career catapulted after her big ‘Student Of The Year’ break, we can only wait and see how things go for Sara.[/tps_footer]