Salman Khan is a controversy’s child. He landed himself in yet one more of those. Recently following the Uri attacks and MNS threatening the Pakistani artists to leave the country, the Indian Motion Pictures Producers’ Association (IMPPA) too passed a resolution banning the participations of not only Pakistani artists but also technicians till the relations ease out.

Some of the big names of Bollywood like Salman Khan and Karan Johar have openly expressed their dissatisfaction over the IMPPA resolution.

Salman Khan has been facing the fury of social media and co-artists of Bollywood like singer Abhijeet Bhattacharya for being against the ban on Pakistani artists.

This Sultan star’s father, Salim Khan leaves no opportunity to support his son and give eye-catching responses. He has done it yet again.

Coming out in support of his son, Johar and Mahesh Bhatt, here is what Mr. Khan tweeted – 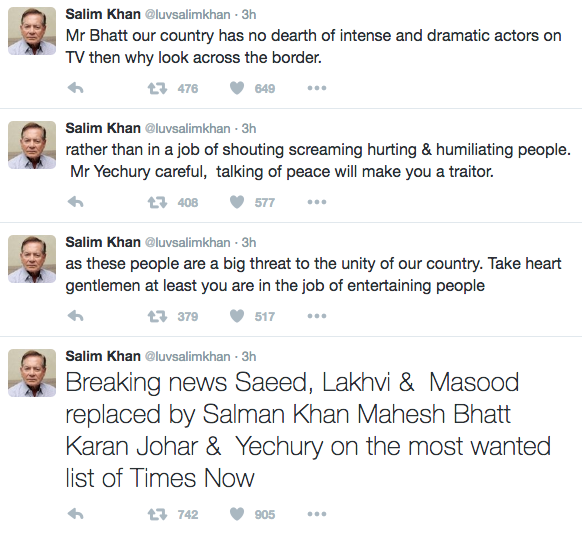 His tweets layered with sarcasm aimed to take a shot at the people who were attacking his son’s personal stand.