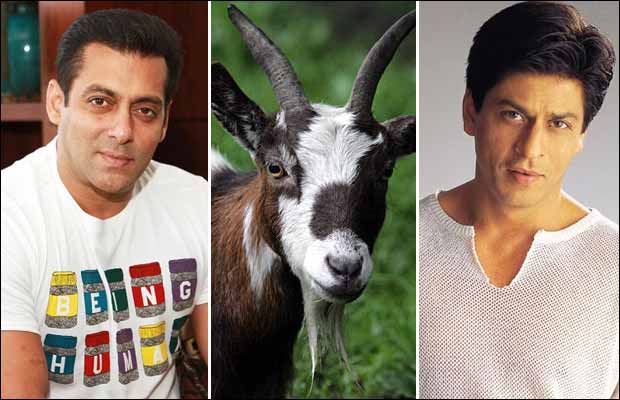 As we all know the Muslim community around the world are prepping to celebrate Eid al-Adha, also known as Bakri Eid. But little did anyone know that this year two biggest names of Bollywood industry Salman Khan and Shah Rukh Khan are on sale in the goat markets in Uttar Pradesh.

Before you brainstorm yourself, we let you know that two goats named Salman Khan and Shah Rukh Khan are being sold for a whooping at the goat market on the occasion of Bakr Eid or Eid al-Adha. Not only that there are number of goats which have been given celebrity names and the prices for the same goes up from Rs.15,000 and Rs.1 lakh. People have option to choose goats and not only in the category of Bollywood stars, one goat on sale also goes by the name of Tennis player Sania Mirza.

Apart from these, also some ‘God gifted’ goats are being sold at higher prices and reportedly the demand is high this year as compared to last year. Those goats at the market are being sold at Rs 2 Lakh as they have spiritual and religious mark on them. A goat from Sadatganj in old Lucknow is said to have a star and moon occurring naturally on its body and is priced at Rs.2 lakh. Another has ‘Allah’ inscribed on its coat and is priced at a staggering Rs.5 lakh.

It seems naming the goats with famous personalities is working for the sellers to earn big during the occasion of Eid and are trying to make big profits this year too.

Also the goat sellers at the mandi, take a good care of their goats. They keep their goats bulky yet good looking and they feed them special diet of chana, matar, vegetable leaves, almonds and honey.