Though there are a lot of controversies and cat-fights or cold wars that happen in B-Town, they are one family after all. When it comes to promotions of other films, praising good cinema or just promoting each other’s social causes, no one can challenge the affinity that Bollywood shares. Especially, Salman Khan who is always encouraging the old and new talent alike.

But, Sultan star suddenly felt threatened or rather conned by a new generation actor, Aditya Roy Kapur. Aditya who is busy gearing up for his upcoming release OK Jaanu, posed for a picture with Salman Khan. In the picture, these two hunks are showing their back to the camera with their hands on their head. And they look smoking hot with their chiseled body. And it’s even difficult to tell one from the other had it not been for Salman’s trademark bracelet. 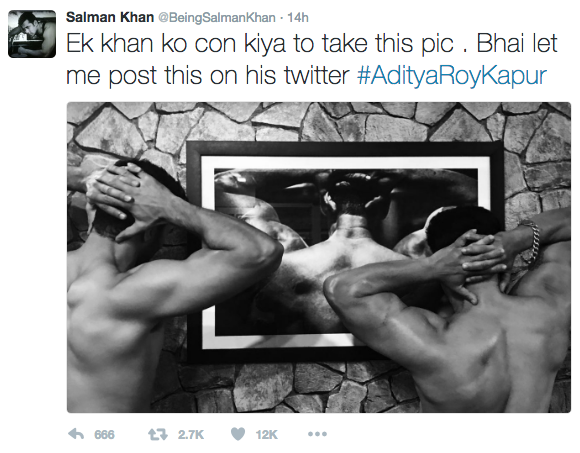 This is funny, isn’t it? So it seems like Aditya conned Salman into taking the picture and now he is warning his friends and contemporaries to be aware of this dude!! Let’s see how others react to this.

OK Jaanu is the official remake of the Tamil blockbuster, OK Kanmani which starred Dulquer Salman and Nithya Menen in lead roles. The film is about live-in relationships.

Alongside Aditya, is Shraddha Kapoor and they are ready to create their magic on screen on January 13!!

Also Watch Video: Salman Khan And Iulia Vantur To Work Together In Kick 2!