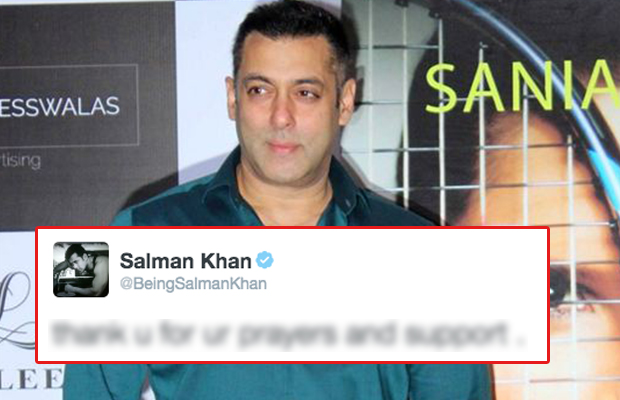 [tps_footer]Salman Khan is still soaking in the success of his latest release Sultan that has performed tremendously well at the Box Office. Not only the overall film, but Salman’s acting is also loved and praised by his fans and critics alike. Just when the actor was celebrating Sultan’s success, he got a reason to rejoice further.

Salman Khan got acquitted in the blackbuck and chinkara poaching case that was running at the Rajasthan High Court since many years.

In 1999, Salman was caught for shooting a blackbuck during the shoot of multi starrer film Hum Saath Saath Hai in Rajathan.

The actor took to micro blogging site Twitter to thank his fans and supporters for their love and prayers. He posted, “thank u for ur prayers and support.”

Present at the Rajasthan High Court for Salman’s hearing was his sister Alvira Agnihotri. The hearing was held today and led to the Khan family heaving a sigh of relief over the superstar’s acquittal. What followed was a chaos on Twitter with fans showering messages for their Bhai on the site.

Well, the actor who has not budged a bit from the headlines in last couple of months is free of tension right now and is all set to commence the shoot of his upcoming film Tubelight to be directed by Kabir Khan.

thank u for ur prayers and support .