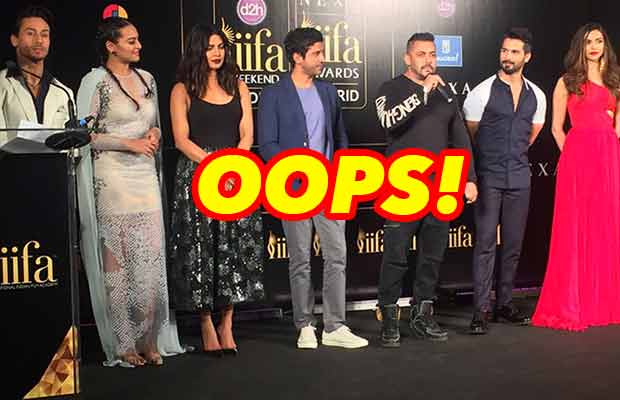 [tps_footer]Salman Khan has reached Madrid, Spain to take part in the most prestigous awards night of the year that is IIFA. As we all know Mirzya trailer starring Harshvardhavan Kapoor and Saiyami Kher was going to be launched at the IIFA award ceremony.

Well, yesterday the trailer of Rakesh Omprakash Mehra‘s Mirzya was launched and Deepika Padukone, Priyanka Chopra, Shahid Kapoor and Farhan Akhtar were present at the event. Apparently Sultan of Bollywood Salman Khan arrived late at the event and hence missed the trailer. He then requested for the trailer to to be played again.

Later, when Salman was getting ready to view the trailer of the film, Deepika and Priyanka were still standing on stage and were taking their sweet time to get down from the stage. As we all know that no one can get as quirky and sarcastic as Salman when it comes to making fun of others. So Salman being witty said, Deepika and Priyanka to stay on stage and watch the trailer again if they want to. Then immediately he added, if they don’t want to see the trailer again its ok.  Now they have gone to abroad for films and don’t like to get associated with our Indian Cinema anymore.

Well, with this the crowd bursted into laughter. We must say when Salman Khan is in a good mood there is no one as cute as him. Don’t you think?[/tps_footer]