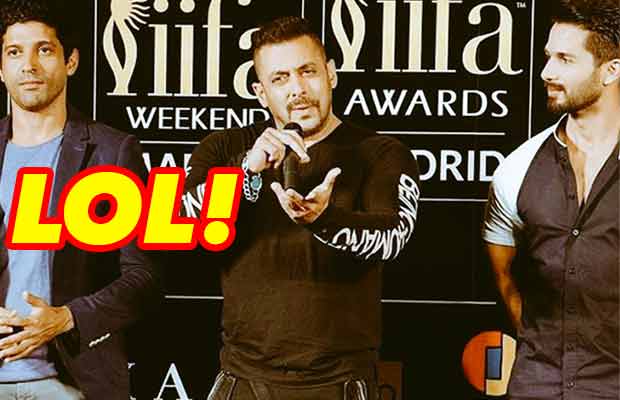 [tps_footer]Salman Khan is known for his quirky answers and it is rare that we find Dabbang Khan in a jovial mood. As we all know Salman Khan has reached Madrid, Spain for the ongoing IIFA awards and we must say that the fans went crazy when they saw Salman Khan at the airport and at the IIFA venue. Salman Khan is known for his entertaining and mesmerising performances which have more for drama and fun element and tad bit of dance. This year too, Salman is  ready to entertain us in his Dabangg avatar.

Salman Khan further added it is going to be a long evening and he has to keep it short. Then Mr. Khan quirkily added, knowing him, he has to keep it short. When it comes to him the shorter it is, the better it is. With this statement, we clearly know that Salman Khan is clearly referring this to his recent ‘rape comment’ controversy which of course has given him a hell lot of attention.

While many organizations and individuals have asked Salman to apologize for his insensitive comment on rape, it does not look like this Bhaijaan of Bollywood is ready to say sorry, yet.  Well, we personally think that Salman should apologize and end this whole issue for once and there is no harm in being sorry for something you have done wrong which is offensive for a large number of population.

On this note, IIFA 2016 is going to have some impeccable performances and we will keep you posted about the same.[/tps_footer]