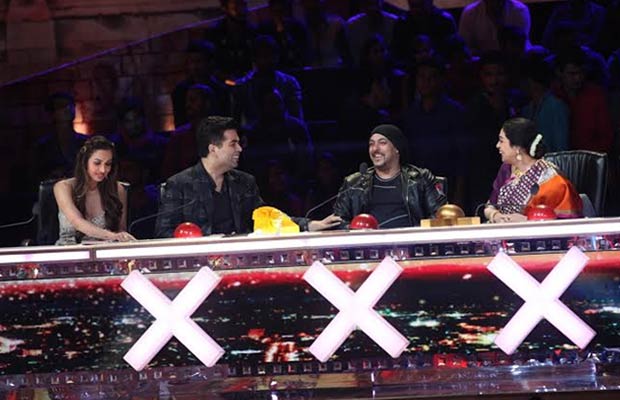 [tps_footer]Bollywood actor Salman Khan is currently on a promotional spree with actress Anushka Sharma for their upcoming film Sultan. Recently, Salman and Anushka promoted their film on the Grand Finale episode of the reality show India’s Got Talent, which was being judged by Malaika Arora Khan, Karan Johar, and Kirron Kher. Like always, Salman looked enthusiastic and in a fun mood to joke around with contestants and judges of the show. We all know how Salman always pulls the leg of Karan Johar and the two literally entertain the audiences at their best.

Well, the same things happened on the sets of India’s Got Talent but one thing really surprised us. There was a real awkwardness between Salman and his ‘Bhabhi’, Malaika Arora Khan. The two ignored each other and moreover, it was shocking when Salman didn’t greet Malaika when he arrived on the show. The actor waved and greeted the other celebs of the show. Well, this clearly showed that the actor is very much upset with his brother Arbaaz Khan’s wife Malaika Arora Khan.

Arbaaz and Malaika’s marriage has hit the rocks and the two are currently living separately. The two have parted their ways and have been living separately since few months. The couple had also issued a joint statement earlier this year, in which they admitted that they have separated and that they have taken a break from their marriage to know themselves better. In fact, Salman tried to be a matchmaker for the couple but things didn’t work out.

Of late, reports suggested that all’s well between Arbaaz and Malaika but going by Salman’s behavior towards Malaika, there seems to be a serious problem between the estranged couple.[/tps_footer]