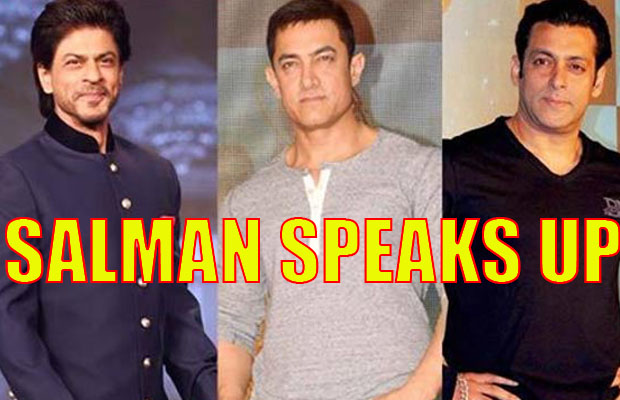 [tps_footer]As we all know Bollywood’s three Khans-Salman Khan, Shah Rukh Khan and Aamir Khan are reigning actors of B-town. All the three stars have been ruling the industry since decades and also, have been sharing a good bond. But there always comes a competition when it’s about their respective films.

Well, Salman Khan has time and again proved that his colleagues Shah Rukh Khan and Aamir Khan are his good friends and not rivals. In an interview with DNA, when Salman was asked about it, the Being Human star said, “People have loved Shah Rukh, Aamir and me for years and made us what we are today. We don’t treat each other as competition anymore. I am not competing with anyone. I am competing with myself. When someone who doesn’t like me tells me, ‘Bhai, tu aaj kal achha kaam kar raha hai’, or even for someone who’s already a fan, we take it to the next level for him.”

“When we entered the industry, we were competing with the seniors. Today, it’s more difficult competing with the juniors. Now, phatt se, we are in the position of our seniors and the kids of this new generation are figuring out what we must have felt back then. But we are doing fine,” he added.

Well, Khans always turn out to be a tough competition for other actors. Though the three stars are not in the competition with each other but their fan following will always get them into a professional fight somehow. Don’t you agree?[/tps_footer]