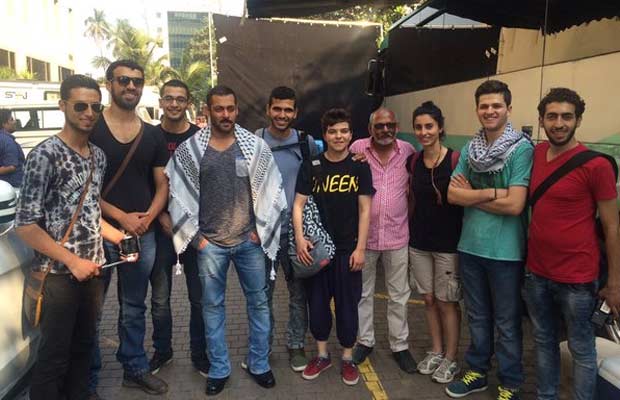 [tps_footer]Bollywood superstar Salman Khan has a loyal fan following. Not only in India, but the fandom is spread worldwide. The superstar has huge following in Palestine as well. Some of his fans from Palestine showered love on Salman when they got a chance to meet him.

Eight actors from the Palestine’s The Freedom Theatre are currently in India on their 10-city tour. They are doing a play in collaboration with Delhi-based theatre group Jana Natya Manch titled ‘Hamesha Samida’. The eight actors recently confessed they were huge fans of Salman Khan. The director of the play and their co-star, Sudhanva Deshpande, got to know about the same and thought to give the actors a surprise. She reached out to ‘Bhajrangi Bhaijaan’ director Kabir Khan, who happens to be her childhood buddy, to arrange a meeting with Salman.

With the help of Kabir Khan, the actors met Salman at a five star hotel on Tuesday afternoon January 5, 2016. He was shooting for his next movie at the venue. The actor was gifted a Keffiyeh which is a traditional Palestinian cotton scarf worn by men for ceremonial purposes. According to a report, Salman was extremely happy and delighted to see the actors and meet them. He also showed keen interest in their play. The group of theatre artists also got a chance to witness Salman shoot for is film. Salman Khan had worn a Keffiyeh in 2012 movie ‘Ek Tha Tiger’ which was also directed by Kabir Khan. The scarf has become a trend after the superstar had donned it in the film.

On work front, Salman Khan is all set to play a wrestler in his upcoming flick, ‘Sultan’. Though the lead actress for the movie has not been finalized yet, but the movie has already garnered a lot of attention. Directed by Ali Abbas Zafar, the film is about a wrestler, Sultan Ali Khan, a three times state champion from Haryana, for whom wrestling is more than just a sport. As Sultan Ali Khan, Salman not only has to be muscular, he is also required to sport a rugged look. The movie is scheduled to release next year on Eid clashing with Shah Rukh Khan’s ‘Raees’.[/tps_footer]