Himesh Reshammiya who recently visited Bigg Boss house to promote his latest album ‘Aap Se Mausiiquii‘ got immense appreciation from Salman Khan, so much so, that Salman Khan tweeted that he loves the ‘Aap Se Mausiquii‘ songs.

Himesh has now roped in Iulia Vantur who has recorded a song with him which is called “Every Night and Day Just Me and You ” for his album Aap Se Mausiiquii produced by Bhushan Kumar. Sources who have heard the song have been heard saying that the song is going to rock the charts in a very big way.

Himesh has great things to say about Iulia, he shares, ‘She is super talent and has sung the song very beautifully and we will be shooting the video soon, I am very happy with the response to the first 3 songs and videos of Aap Se Mausiquii and am looking forward to releasing the entire album soon and the other videos which will feature some amazing talent.

Bhushanji and lyricist Manoj Muntashir also loved Iulia‘s voice and the way she has sung the song. I have always been indebted to Salman Bhai and his family for supporting me and am very happy that Salman Bhai loves the songs of my new album.’

Himesh Reshammiya‘s new album ‘Aap Se Mausiiquii‘ has already received great response with 13 million views already on its first 2 videos in just a few days and the 3rd track called “Tonight ” which got launched recently has bee. getting great response from all party track lovers and DJs all over the globe.Next week Himesh will be releasing the entire music album at an event where the 4th video will also be launched.

Produced by Bhushan Kumar, the album ‘Aap Se Mausiiquii‘ has been sung and composed by Himesh Reshammiya. 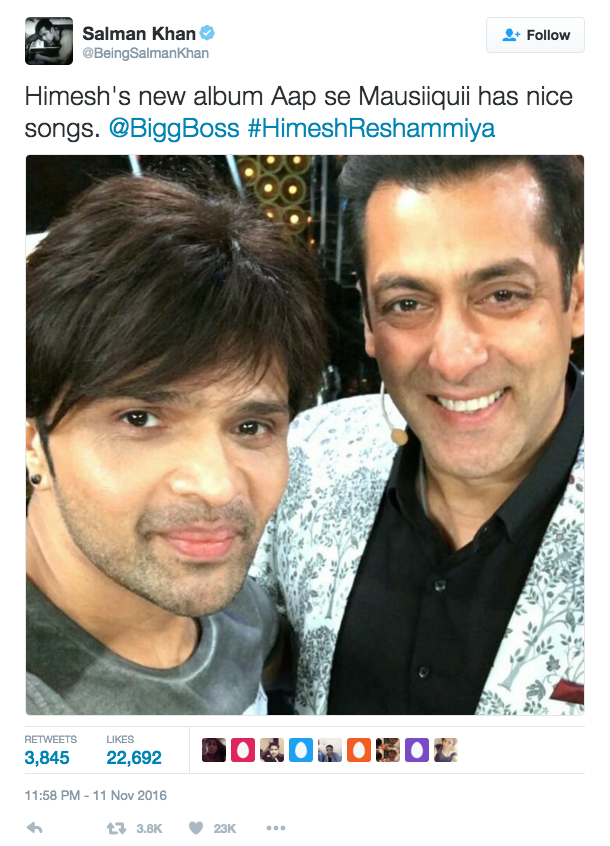 Also Watch Video: After Iulia Vantur, Is Salman Khan In Love With This Actress