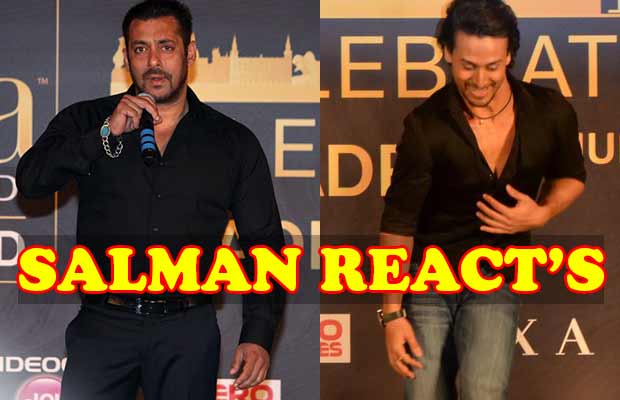 [tps_footer]Get ready to watch tons of Bollywood stars and music sensation under the same roof at the IIFA 2016 held in Madrid. We will witness the love, energy, and lovely performances by Salman Khan, Hrithik Roshan, Priyanka Chopra, Deepika Padukone, Sonakshi Sinha and Tiger Shroff who have made this year’s IIFA larger than ever. It’s reported that the IIFA Rocks event will have musical performances by Pritam, Meet Brothers, Benny Dayal, Kanika Kapoor, Monali Thakur, Neeti Mohan, Papon, and more. So, we will see stars and listen to great-melodious singers. It’s the first time we will see Tiger Shroff performing at the IIFA and we are sure to see a lot of Heropanti from Tiger for his IIFA stage debut as well. And, recently Tiger even confessed that for him Hrithik Roshan and Salman Khan are the gods of acting. We wonder if Tiger is trying to be humble or is he poking fun at Salman by comparing his dance with Hrithik Roshan who is a fantastic dancer.

Anyways, when Salman Khan was asked how is he preparing himself to perform at the IIFA 2016, Bajrangi Bhaijaan directly said he did not practice a lot because he had no time for it as he was shooting for movies back to back, and candidly Salman Khan said don’t expect me to dance like Hrithik Roshan and Tiger Shroff. Well, Salman surely has his way of doing dance steps and enjoying his own performances. But even his looks and presences are enough to excite his audiences to watch him no matter what he does or even if he is just standing. Stardom means Salman Khan!

We are sure about the fact that IIFA 2016 will set new records of entertainment and we are waiting to have all the fun to watch all our favorite stars together like a family and enjoying each others performances. By the way, tell us who are you waiting to watch out of so many stars at the IIFA?[/tps_footer]