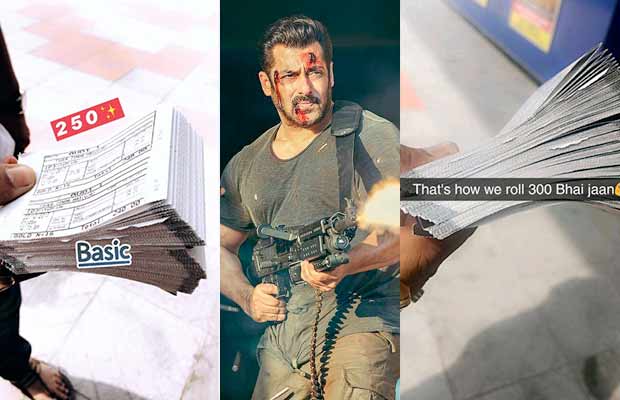 The Salman Khan hysteria has begun at the Box office as advance opening for Tiger Zinda Hai have finally started. The trailer of the film had taken the internet by storm and now, the madness continues with the advance booking five days before the release. Tiger Zinda Hai, a sequel to Ek Tha Tiger is expected to receive massive opening at the Box Office.

The advance booking for the Ali Abbas Zafar directorial started from December 17, 2017. The response has been overwhelming all over India with seats filling in a blink. The most of the shows in multiplexes around India are already sold, and remaining are fast filling. Fans are going crazy and are buying tickets in a bunch of 300s.

This once again proves by the ongoing madness, that there is going to be lots of whistles, the dancing, the screaming inside the theatres as Tiger will roar again.

Well, Salman Khan’s last release Tubelight didn’t live up to audience expectations. The actor is all set to return to the big screen in all his glory with Tiger Zinda Hai. Let’s wait and watch how things turn up. Will Tiger save this year’s sinking Box Office?

A friend of mine booked 300 tickets of #TIGERZINDAHAI salute to this true @BeingSalmanKhan fan. pic.twitter.com/npPTlPYoJr

The Advance Booking Of Tiger Zinda Hai opened on Sunday And The usual advance theaters like Pacific, Odeon and Delite in Delhi saw a huge rush in the afternoon as the first day show tickets sold fast. – BOI

I got my tickets, booked in bulk for our entire family & friends. @BeingSalmanKhan movies are not watched they are celebrated 😍 #TigerZindaHai

The Movie is a story about Indian nurses taken hostage. Salman and Katrina battle it out to save their lives from terrorists. Just like its prequel Ek Tha Tiger, Tiger Zinda Hai too promises high octane action sequences.