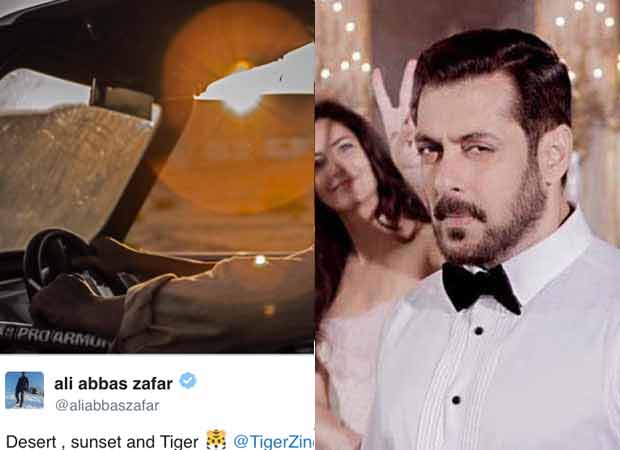 Salman Khan’s Tiger Zinda Hai is one of the most awaited films, this year. It is also because it is bringing back the lovely duo of Salman Khan and Katrina after six long years.

There is still a long time for the movie to release. But for the restless fans, there is a still from the sets of the film. A picture has been shared by the director of the film, Ali Abbas Zafar, in which Salman looks intense in that rugged look. He tweeted the picture with the caption, “Desert , sunset and Tiger @TigerZindaHai.”

The director and the cast of the film has been sharing pictures on a regular interval, which has helped a lot in creating the buzz for the movie in advance.

The team of the film is currently shooting in Abu Dhabi. Tiger Zinda Hai is the sequel of the 2012 release Ek Tha Tiger. The first installment was full of drama and action-packed scenes and the fans are expecting the same from the upcoming sequel.

There were reports doing round in the media that the bodyguards and the security team has been promised a reward if they do their jobs well. It was necessary as things were getting leaked from the sets.

In a conversation with a daily, a source informs, “Recently, Salman Khan who is working round-the-clock got irritated with the security arrangements because things were being leaked from the set. Now, YRF has hired a much bigger team and they have flown to Abu Dhabi to be with the actor. It is a well- known fact that the studio doesn’t tolerate stuff from being leaked from the set. But the large-hearted actor has given the security personnel some incentive. They have been promised a good holiday and money for shopping if they do their job well. That means to keep that mouth zipped.”

Talking about the work fronts of the leads, Salman Khan is going to be seen on the screens in his Eid release Tubelight, whose trailer as well as The Radio Song is being loved by the audience. On the other hand, Katrina Kaif is coming up with her July 14 release, Jagga Jasoos.