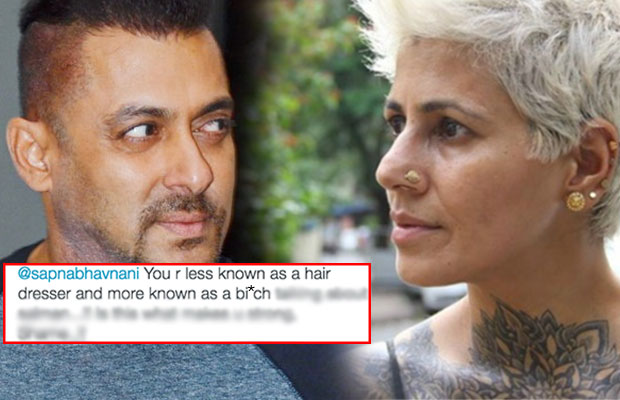 [tps_footer]Sapna Bhavnani in an eye-grabbing interview revealed on her harrowing experience in Bigg Boss. The celebrity who gained all the limelight in the show for her public tiff with Salman Khan has labeled the Dabangg Khan as a male chauvinist. Sapna has revealed on her Bigg Boss stay and has claimed that she was threatened by many not say anything ill about Salman as that could get her in trouble.

Talking about the same, Sapna Bhavnani also added that people worship him because they want work in one of his films! The celebrity who earlier gained headlines for opening on her gang rape has now become a target for fans on the micro-blogging site Twitter.

Opening about her Bigg Boss days, Sapna had commented, “Actually a lot of people told me, I was warned that you shouldn’t talk about him (Salman Khan) like that because you could get killed, and I was like, ‘what!’ I had heard rumours, but I have been channelling this ‘no fear’ thing for the past four years and I am not going to let a monkey scare me. I have been through a gang rape, I know what it feels like, I am a surviving member… there is nothing worse you can do to me really.”

The outspoken talent bundle further commented on her experience in Bigg Boss saying, “You have a male chauvinistic f***ing pig as a host of this f***ing show, that insults people, so people watch the show, and people worship him on the show because people want a job in one f his stupid f***-all movies where he dances like a monkey – that’s Bigg Boss in a nutshell.”

Sapna’s comments for Salman Khan have irked the fans and they have slammed the ex Bigg Boss contestant for the same.

Many users took to Twitter and targeted Sapna Bhavnani for her statements. Some of the tweets are.. 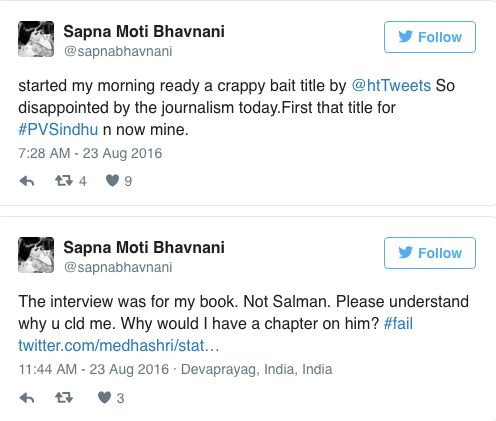 I hope someone kills sapna Bhavnani

@sapnabhavnani  U R CHEAP and ur like a momkey and donkey

@sapnabhavnani it has become a fashion in industries from sideline singers to loosers, that abuse him and get a bite from media.

@sapnabhavnani i know u now just coz of salman, he is gud in gvng free publicity to strugglers. Keep enjyng ur fame & call me bhaitard now

@sapnabhavnani @CrookBond_D @medhashri .. To b honest u wanted to win a brownie point out of it and u succeeded in ur endeavour. All d best

@sapnabhavnani You r less known as a hair dresser and more known as a bitch talking about salman…!! Is this what makes u strong, Shame..!!

She is trying to gain publicity for her book! Best way? Call salman a monkey & chauvinist pig. You really know marketing. @sapnabhavnani

If you have a daughter?, make her like PV sindhu & not @sapnabhavnani . #SapnaBhavnani.

@sapnabhavnani  Who is Sapna Bhavnani ? Accha, the one who talks against salman !! Fame Hungry b****thats how people know u 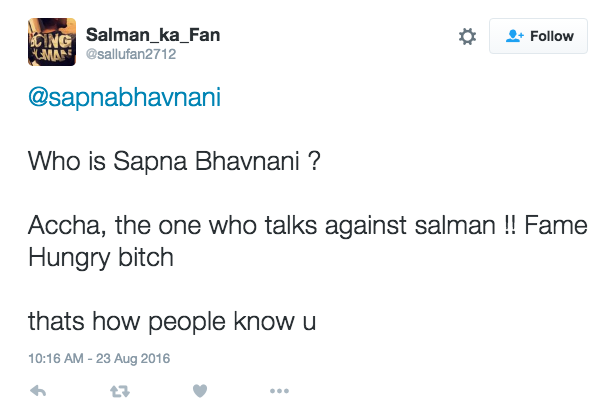