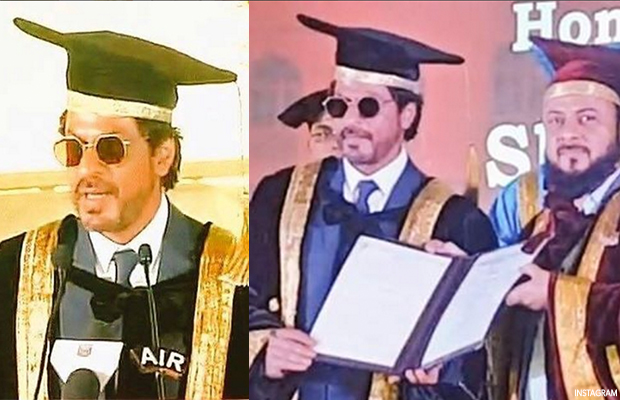 The actor who has lived his dreams and changed them into reality, the star who has proved his talent at every point proves yet again how scholar he is with his work outside films too. Shah Rukh Khan just got a honorary doctorate from the Maulana Azad National Urdu University (MANUU) for his excellent contribution in the promotion of Urdu language in his films. The star got conferred with the degree by the MANUU Chancellor Zafar Sareshwala at the sixth convocation.

Shah Rukh Khan, seen in a graduation gown and sunglasses, received the doctorate and an applause by the students at the university.

The actor during his acceptance speech said that he was thankful to the university and said that his parents would have been extremely happy to see this moment especially after the fact that he received the this honour at his mother’s birthplace.

Shah Rukh said that his father was a follower of Maulana Abul Kalam Azam and had contested an election as an independent candidate.

Shah Rukh said that his father spoke Persian and Urdu beautifully and whatever little knowledge he has about the language, is only because of his father. He also said that it is a big responsibility in the field of education and Urdu and languages.

The actor said that through his work, whatever little he can do, he promised to make the best out of his abilities.

Shah Rukh Khan, is now busy promoting his next month release Raees also starring Nawazuddin Siddiqui based on a Gujarat based bootlegger.