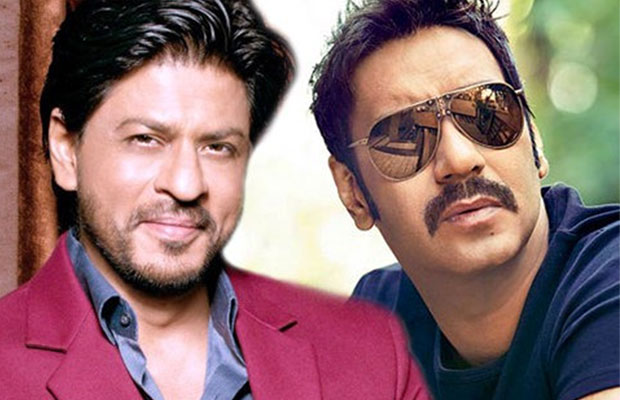 [tps_footer]Shah Rukh Khan and Ajay Devgn are two of the talented and versatile actors in Bollywood. The duo work in different kind of films and have their own set of huge fan following. Both have been working in the industry since the 90s and are still on the top. Well, even when their films Jab Tak Hai Jaan and Son Of Sardar clashed at the box office in 2012, both the films received a good response. SRK’s Jab Tak Hai Jaan received more box office collection than Ajay’s Son of Sardar.

Well, the stars are again going to have a box office clash this Diwali. Ajay’s Shivaay and Karan Johar’s Ae Dil Hai Mushkil are releasing on the same day. To remind you, King Khan has an interesting and important cameo in KJo’s ADHM. His character is heard to be quite charming and lovely. He is apparently playing Aishwarya Rai Bachchan’s husband in the film. Well, this is not just a KJo-Ajay war, but also Ajay-SRK war. In the last box office clash, SRK’s film was ahead of the race, so it would be interesting to see another clash and what will the fate of their films now.

The teaser of ADHM will be out on August 30. The film stars Ranbir Kapoor, Anushka Sharma, Aishwarya, and Fawad Khan in lead roles. Also, after a long time, Karan will be directing SRK. Whenever SRK and Karan work in a film together, it always turns out to be magical. Well, let’s see if the magic works this time and succeeds in beating Shivaay or not.

On the other hand, Shivaay’s trailer came out last month and looks quite promising. The visuals and stunts look quite enthralling. Well, both the films are quite huge and are special and important for both Ajay and Karan. Now with Shah Rukh also being a part of ADHM adds more to the excitement. Shivaay and ADHM will release on October 28. So, what do you think? Ajay or SRK, whose performance will be a spectacular one? Tell us your views in the comment section.