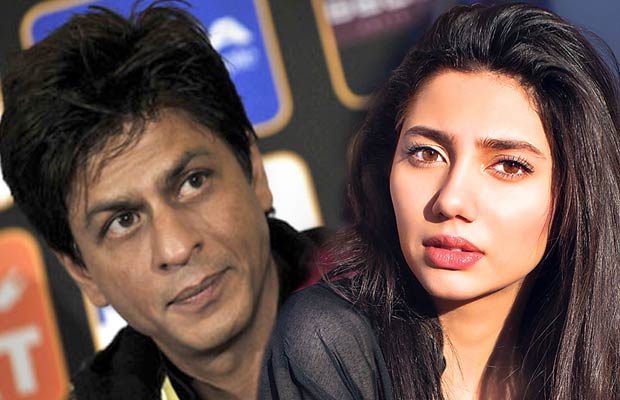 [tps_footer]Bollywood actor Shah Rukh Khan will be seen soon romancing actress Mahira Khan in his much talked upcoming film Raees. SRK, who is known for his enthusiasm and always smiling mood, isn’t happy and is actually annoyed on his co-star Mahira Khan.

Well, before you get down to some assumptions, there is nothing serious between the two co-stars not they had any type of arguments. It’s all about Shah Rukh Khan being very much sarcastic about himself. Mahira Khan shared a picture of her sporting a cool tee with SRK’s popular dialogue from their film Raees written on it.

The gorgeous actress took to her twitter to share her picture which showed SRK’s famous dialogue, “Baniye ka dimaag aur Miyaanbhai ki daring!”
SRK who felt left out and for fun he sarcastically replied her back saying, “Am I the only one who doesn’t have this t shirt?! Or is there a rule u can either mouth the lines or wear them?” 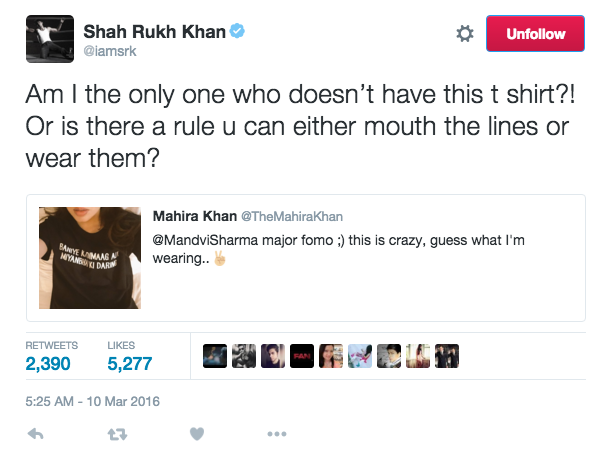 Well, SRK is the King of Bollywood and we are sure makers of the film must be having bigger and unique plans for the actor. Don’t you think?

Directed by Rahul Dholakia, Raees tells the story of a bootlegger, whose business is thwarted by a policeman. SRK will be seen in the role of an alleged gangster who ran the illicit liquor business in Gujarat. The movie also stars Nawazuddin Siddiqui, Pakistani actress Mahira Khan in the lead role. The film is schedule to release this year on Eid.[/tps_footer]