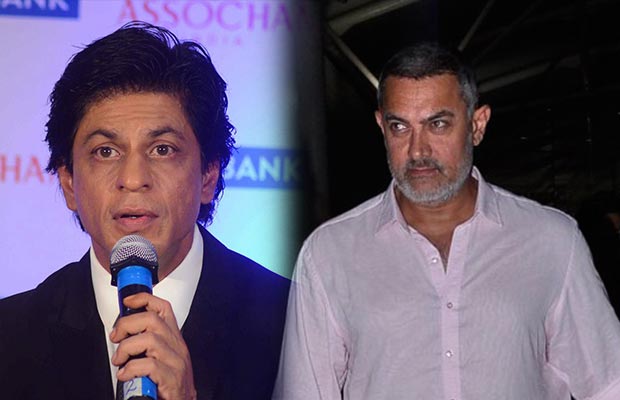 [tps_footer]Shah Rukh Khan and Aamir Khan are sailing in the same intolerance row boat. The two superstars are much in limelight lately for their opinions and views on the growing intolerance in the country. Shah Rukh Khan created a stir in the country when he opined that India is intolerant, moreover Aamir Khan also followed the suite and commented that there is growing disquiet in the nation. Both the superstars were clear in their stance but the masses were agitated by the same.

Shah Rukh Khan’s intolerance comment created a debate on the social media and the issue took an ugly turn. Additionally, Aamir witnessed the most brunt when he added that his wife Kiran Rao had also suggested that they move out of the country.  After the said comments, various political entities too came in the fore front and added their views giving more fuel to the fire.

Aamir recently clarified on his stance and also gave a lengthy logical explanation of his statements. SRK also did not bog down and is keeping his stance intact. Shah Rukh Khan has now confessed in a way that he is in support of Aamir Khan’s comment.

The King Khan of the Bollywood industry when asked to comment on Aamir’s intolerance row commented, “You don’t have to be proving your patriotism in any other way, except for thinking good for the country and doing good. You have to work for the benefit of the country. If I work for the country in the most kindest way in what I am good at, my country is going to benefit from that. But if I am corrupt, and regional about it, I will be harming my country.”

Shah Rukh Khan further added, “Twitter and social media is about free voice, people do take very radical steps, they get abusive. Even a generic statement can be turned into radical statements by people.”

Further commenting on Aamir’s take on intolerance, Shah Rukh stated, “I’m relieved now that I should now talk only about what I know. I need not speak on any and every other topic on which someone feels that I should speak on because I have been around for 25 years.”

Well, seems like the prolonged intolerance debate has finally seen an end.