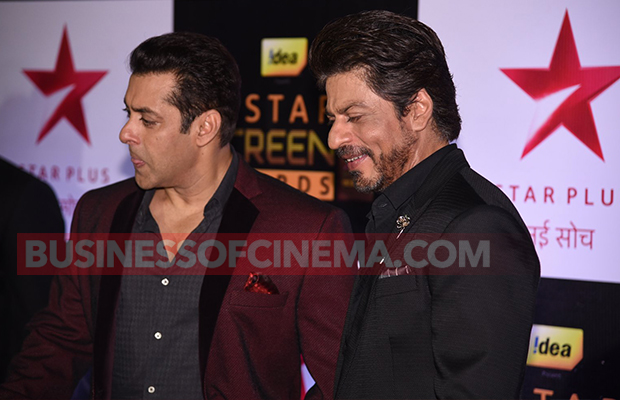 Bollywood superstars Shah Rukh Khan and Salman Khan rocked at the 23rd Annual Star Screen Awards 2016 that took place yesterday in Mumbai in a grandeur way. The dapper duo arrived together at the event and also posed together on the red carpet of the awards night. That’s not all, SRK and Salman left audience mesmerized with their brotherly bonding like never before. Morover, their tounge in cheek remarks and witty one liners left audience splits.

Salman and Shah Rukh Khan confessed that they will be watching Aamir Khan’s Dangal first day first show. We all know Salman Khan’s impending marriage has always been a talk of the town and also his love for kids is endless. Taking a dig on the same, SRK at the awards night said Salman’s resolution for New Year is to have a baby girl in 2042 and name will Sultani Khan.

Salman and Shah Rukh Khan left audience splits into laughter with their tongue in cheek remarks about each other. In fact, they also made fun of their feud in the past and that how they have become now good friends again.

Click Next To check out some amazing inside pictures of them from the awards night!