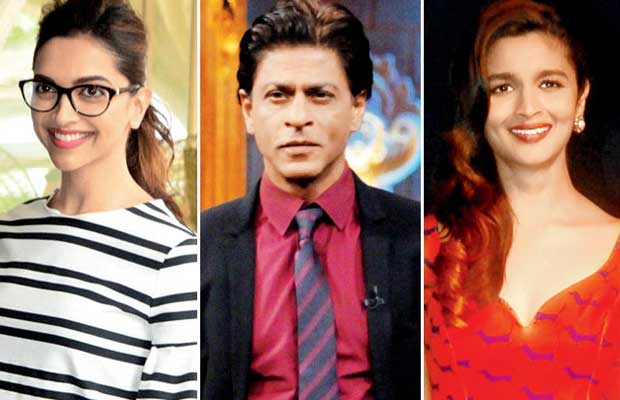 Bollywood’s most talented actors Shah Rukh Khan, Deepika Padukone and Alia Bhatt are busy with their back to back projects currently, however, rumor mills suggest that the three actors will soon share screen space for an upcoming film.

All the fans hold your breath, reports making rounds say that if everything falls into place and the three stars SRK, Deepika and Alia nod a yes, then the three will be seen together in Aanand L Rai’s next film. Filmmaker Aanand L Rai who has now become one of the most sought after director after the film ‘Tanu Weds Manu Returns’, is planning to rope in these three superstars for his next venture.

The only constraint in the project is that the actors will have to keep their dates blocked, which is difficult, as all the three are lined up with various projects. It is also in the air that Deepika has shown a positive inclination towards the film and has also locked in dates for the same. Whereas newbie Alia Bhatt is also keen on working with the two giants of acting Shah Rukh Khan and Deepika Padukone and is working on adjusting her dates for the film.

It is known that after the film ‘Tamasha’, Deepika has no demanding project in her kitty and the actress is therefore in a position to give dates to Rai’s film. Alia and Shah Rukh are already roped in for Gauri Shinde’s next film. The two will soon begin shooting for the same.

With Alia Bhatt and Shah Rukh Khan already starting with Gauri’s project, Aanand L Rai’s film will have to start after it. Rai’s film will surely be the one gaining headlines if the three actors nod a yes. No official announcement for the film is yet made.