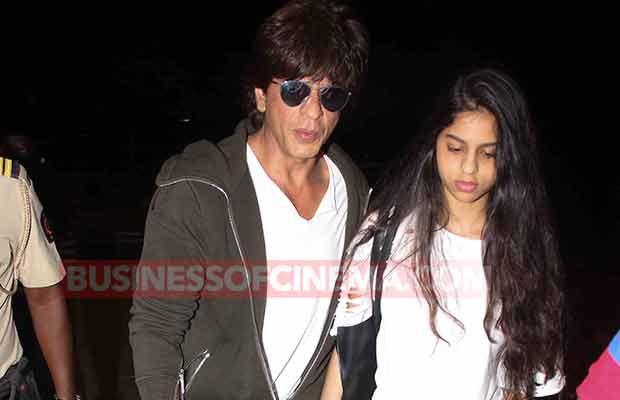 The Bollywood actor Shah Rukh Khan is an amazing father and we have seen it on several instances. No matter how busy the actor is, he has always got time for his children – Aryan, Suhana and AbRam.

Recently, we had seen the Raees actor having a fun-time with his sons Aryan and AbRam at the IPL match in Eden Gardens, Kolkata. The audience also got to see a cute gig when little munchkin AbRam raced his father Shah Rukh at the field.

And the doting father was spotted again doing his duty as he dropped his daughter Suhana Khan at the airport. The girl left for London last night and Shah Rukh was there to see her off.

The actor sported a very casual look, wearing a suede grey jacket over a white t-shirt paired with faded black jeans. On the other hand, Suhana was looking pretty stylish in that over sized ripped white t-shirt and black bottoms.

Talking about the work front of the actor, he has been paired up with Anushka Sharma for the third time after Rab Ne Bana Di Jodi and Jab Tak Hai Jaan for Imtiaz Ali’s untitled project. The release would be an interesting one as it would be clashing with Akshay Kumar’s Toilet: Ek Prem Katha on August 11, this year.

Shah Rukh Khan is also working in Anand L Rai’s next in which he is reportedly playing the role of  a dwarf.