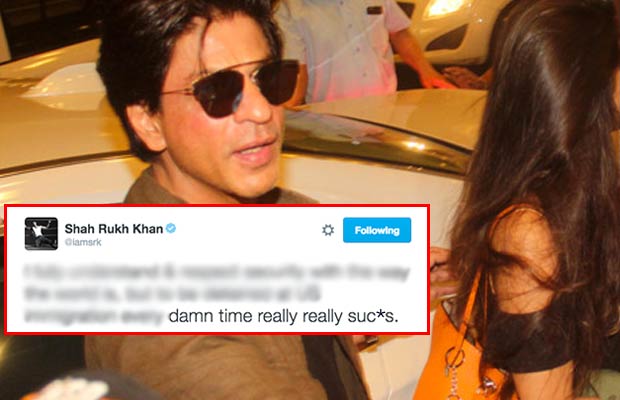 [tps_footer]Shah Rukh Khan has had a bitter relationship with airports. Many a times the superstar is in the news for getting detained. Yet again the King Khan of the tinsel town was detained at the Los Angeles airport. SRK was earlier detained in the year 2012 at New York airport for two hours. Likewise, he was also in detention at the Newark Liberty International Airport in New Jersey. The matter had turned almost serious at New Jersey as his name had popped on the alert list too.

Well, SRK who is known for his wittiness has given a superb reply to his recent detention. The superstar took to his twitter account and posted, “I fully understand & respect security with the way the world is, but to be detained at US immigration every damn time really really s**ks.” 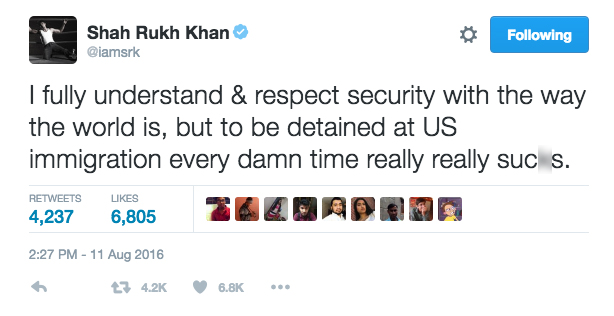 In another tweet, the Baadshah of the industry tweeted as how he caught numerous Pokémons while he was in detention. The mind blowing star tweeted, “The brighter side is while waiting caught some really nice Pokemons.”

The US State Department’s Assistant secretary of south and central Asian affairs, Nisha Biswal apologized to King Khan on twitter saying, “Sorry for the hassle at the airport, @iamsrk – even American diplomats get pulled for extra screening!” 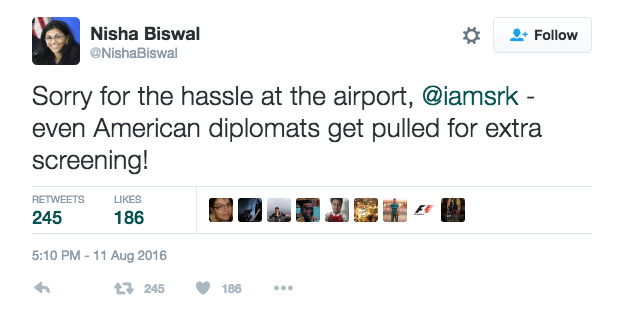 On the film front, Shah Rukh Khan will be seen in Imtiaz Ali’s next and Anand L Rai’s directorial. The actor is also gearing up for ‘Raees’ and ‘Dear Zindagi’.