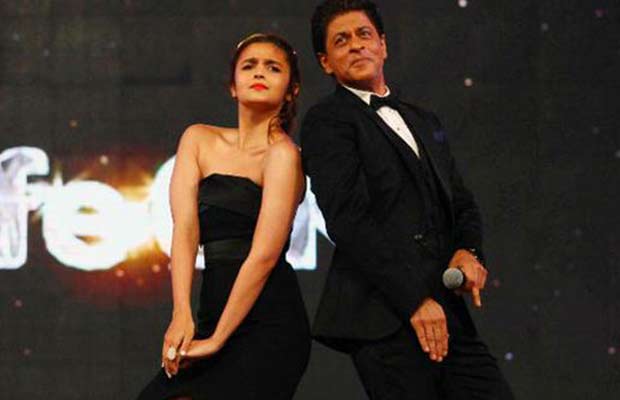 [tps_footer]Shah Rukh Khan and Alia Bhatt will be sharing screen space in Gauri Shinde’s next. The two stars who are immensely talented will be seen together for the first time. Shah Rukh Khan is known for his chivalrous image and the actor is flaunting his charm on young actress Alia Bhatt too. Alia who is moving from strength to strength in her career scale is undoubtedly smitten by SRK.

According to reports, SRK and Alia were shooting in Goa for Gauri Shinde’s film. The rising temperatures were seemingly unbearable and cute actress Alia could not bear the heat and sunny environment. Well, King Khan who makes sure that his leading ladies are always at ease came to the rescue for the chirpy actress too.

It is said that the Highway actress was evidently uncomfortable with the rising heat and Shah Rukh Khan noticed the same. The witty superstar gifted the actress a portable fan to beat the heat. Well, now that’s something quick!

Gauri Shinde’s film starring Shah Rukh and Alia is still untitled. The plot of the movie is kept under wraps to avoid any leaks. The movie is highly anticipated since its announcement for its unusual star cast.

Other than the stated film, Shah Rukh Khan is currently also busy with the films ‘Fan’ and ‘Raees’. The actor is shooting nonstop for the two films. The elongated glimpse of ‘Fan’ is already out and the film is highly anticipated by the masses.

Alia Bhatt on the other hand will soon be seen in the film ‘Kapoor & Sons Since 1921′. The film stars actors Sidharth Malhotra and Fawad Khan along with Alia. Directed by Shakun Batra, the love oriented family entertainer will hit the screens on March 18th, 2016.[/tps_footer]