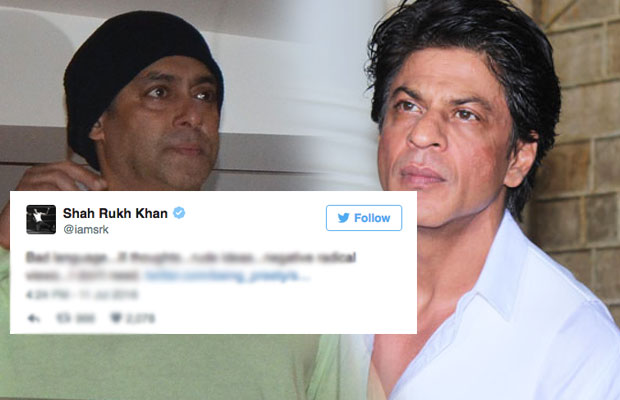 [tps_footer]We all know that Shah Rukh Khan and Salman Khan are undoubtedly the superstars of Bollywood and both of them have a major fan following. While obviously, Salman fans don’t like Shah Rukh and hence don’t mind abusing him on Twitter and the same goes with Salman Khan. In a recent chat session of #AskSrk a Salman Khan fan with username @sultan asked Shah Rukh Khan as to why did he block two of his friends. To which Shah Rukh replied, ‘Bad language… ill thoughts… rude idea… negative radical views… I don’t need’

Well in the past Shah Rukh Khan has blocked quite a number of Salman Khan fans and has even mentioned that he is not active on twitter that much. Since he doesn’t like to read up abuses and nor does he like to read up idiotic quotes. But unfortunately, he ends up reading them whether he likes to read it or not. Shah Rukh Khan is known for his gentle demeanour and hence the actor prefers staying away from all negative comments.

While Shah Rukh Khan and Salman Khan have now patched up with each other, but we wonder when will their fans patch up?
Are you a Salman fan or Shah Rukh fan? Tell us in the comments below.