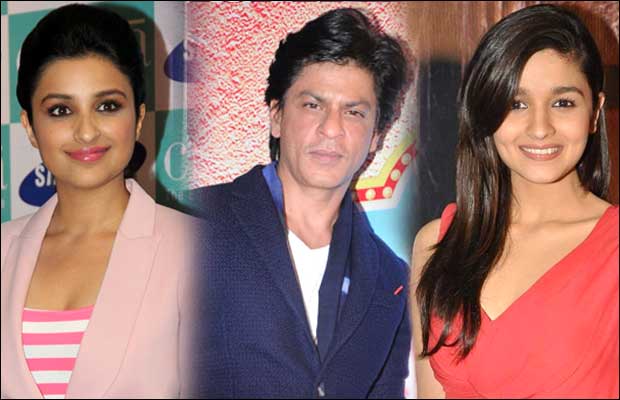 The young divas of the industry might soon team up with the King Khan of the tinsel town Shah Rukh Khan. Alia Bhatt who has expressed her willingness to share screen space with actresses Shraddha Kapoor and Parineeti Chopra is speculated to give the idea a real shape.

Reports suggest that Shah Rukh Khan is all geared up to produce a women centric film. Rumors making rounds say that SRK is looking for the right concept and might don the producer’s hat for Alia and Parineeti. There is no official confirmation on the same, but the Dilwale actor SRK is keen on doing something out of the norm.

It is being said that the movie will be a light hearted chick flick with a message for the female clan. With no hardcore drama and clichés, the film is expected to be unique on the lines of independence of women. It is in the air that the film will be directed by Farah Khan who is currently with the Dilwale team.

Also Read:Salman Khan: Shah Rukh Khan Gets Me In Trouble, Then I Have To Come And Explain

SRK has already confessed that he will be doing three films in a year to give more time to his family, seems like the super busy Khan is also going to try new genres apart from the staple ones.

Gorgeous actress Alia Bhatt is kissing success with each of her passing films, the new entrant already is applauded for her versatility and choice of films. Alia is already teaming up with SRK for Gauri Shinde’s next, whereas, Parineeti is going on an all-time low with her back to back duds.

Parineeti is out of the limelight since a long time; the talented diva is appreciated for her candidness on screen but is still looking forward for a blockbuster in her kitty. Well, if SRK decided to go ahead with this women centric film, Parineeti might just get another big push on her career ladder.

Now whether the speculated film actually goes on floors or no is yet to be witnessed!