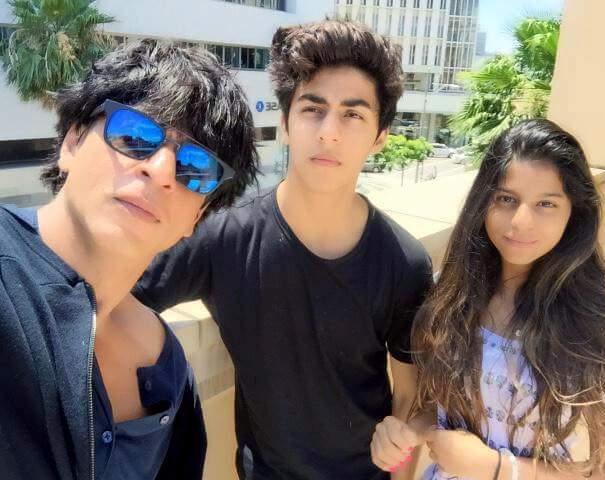 Bollywood’s King Khan, Shah Rukh Khan has always been upfront about expressing his views about his children. The actor cannot seem to control himself when it comes to his kids, and makes it a point to share each and every tiny little feelings he has for them. SRK took to his Twitter handle once again, and this time to comment on his kids’ style sense.

Shah Rukh Khan shared a snap of daughter Suhana and son Aryan stating that he thinks his kids are turning out to be lean, mean and very cool. The witty actor further added saying that he thinks he needs to keep up with his kids and their coolness! Well that much is for sure as all three SRK juniors are on point with their style and coolness, including the tiny tot AbRam.

Shah Rukh Khan tweeted, “Sorry but can’t refrain from saying I think they r turning out lean mean & very cool. I need to keep up…” Well he right for sure! We absolutely loved the lean and mean look that Aryan Khan is sporting right now. The stylish hairdo and all black attire is surely on point, but his rough cut jaw line and lean hot body is enough to make all the girls scream for him! On the other hand Suhana looks absolutely lovely in her comfortable yet stylish jacket and boots.

Sorry but can’t refrain from saying I think they r turning out lean mean & very cool. I need to keep up… https://t.co/BSHhyR7Q9W

The pic was originally shared by mommy Gauri Khan on Instagram, and daddy Shah Rukh Khan jumped right on it to share it via the micro blogging site Twitter. SRK has always been known for keeping a tab on his children and sharing their whereabouts with his fans. Whenever SRK shares a video or photo of tiny AbRam, he makes our day! SRK is currently shooting for his film ‘Dilwale’ starring Kajol set to release on December 18, 2015.