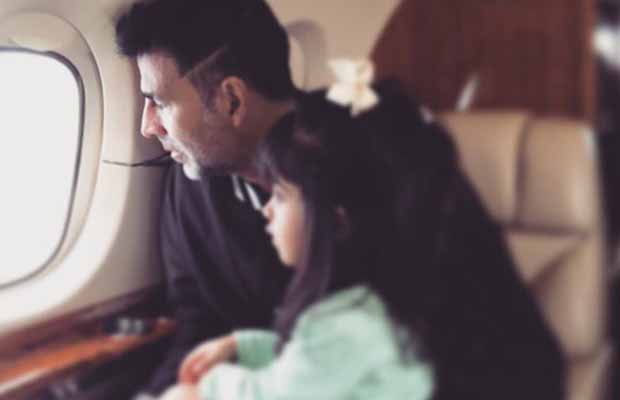 Bollywood’s action master Akshay Kumar is all set to take a vacation with his little bundle of joy Nitara. Mommy Twinkle shared a beautiful snap of Akshay and their daughter Nitara who is comfortably sitting on her daddy’s lap. Both of them seem to be peeping out of the window seeing the wonderful sight high up in the sky. Twinkle and Akshay have been spending some quality time together recently, and it looks like Nitara has joined the gang now.

Twinkle took to her Twitter handle to share a snap with the message, “And we are off #HolidayHoliday”. Well the Khiladi family is off to a much needed vacation, and hopefully we’ll get a glimpse of their holiday mania. In the snap we can see Akshay Kumar sporting his usual ragged no shave look wearing comfortable tracksuit. While little Nitara looks adorable in her comfy little attire. Must say, the 2-year-old kiddo has thick and shiny stylish hair already!

Earlier Akshay Kumar had tweeted some photos of his time out with wife Twinkle Khanna during the shooting of his upcoming movie ‘Housefull 3’. The star wrote, “Been shooting in England for #Housefull3. Made d most of my day off roaming around Norwich with the wife! #funtimes” We wonder where the family is headed this time.

Akshay Kumar has had a busy year in 2015 with back to back movies. His films ‘Baby’, ‘Brothers’ and ‘Gabbar Is Back’ all crossed the 100 crore mark which is quite a huge success. ‘Singh Is Bliing’ also did fair enough at the Box Office and now the star has films like ‘Housefull 3’ and ‘Airlift’ to look forward to. Certainly Akshay Kumar is in no mood to stop anytime soon, but the star is now on a much needed holiday with wife Twinkle and daughter Nitara.