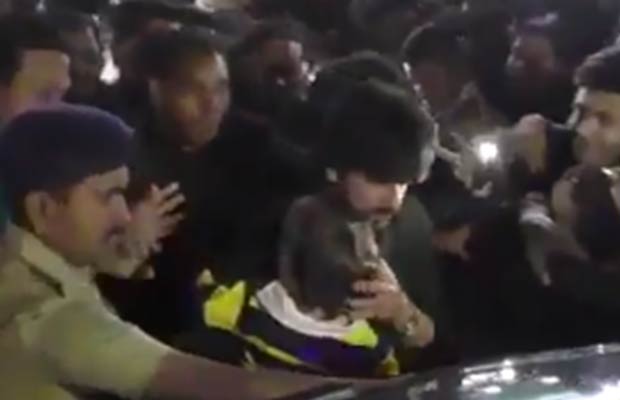 [tps_footer]It never takes too long for people to know now where their favorite stars are. Thanks to their and their PR team’s nonstop updates on various social networking sites saying “Look, I am here today” or “I will be visiting this city or that restaurant” and so on. But an update from Badshah Khan can’t be ignored at all.

He is currently shooting for movie “Raees” in Bhuj and it didn’t take too long for fans to know that their super star is there for a shoot along with his son Abram. There was a huge crowd of people waiting to see the father-son duo and kept waving at them and chanting there names. Abram is surely getting aware of his father Shah Rukh Khan‘s stardom and was just curiously looking at people. Baby boy will get used to all this hype as be grows and surprisingly, Aryan and Suhana never got this kind of reaction from people the way young Abram gets it all.

He is a favourite star kid for many and is pretty fond of Aaradhya Bachchan. Looks like “all is well” for Abram and daddy dear was so protective of him that he barely kept him down, Abram was in SRK‘s arms all the time. Seeing the mob we wonder if the tiny tot might have turned jittery. But the way King Khan guarded his son and brought him till the car is a must watch. Even while shoot for “Dilwale“, Abram was spotted on the sets and was clicked with Rohit Shetty, spending quality time with big daddy Shah Rukh Khan and playing on the set.

SRK and AbRam in Bhuj. @iamsrk He must be the youngest Indian to be mobbed like this haha pic.twitter.com/sEDDmjpGaB

SRK Pulled Up a Lady Woh Fell Down at Bhuj Airport #Raees pic.twitter.com/tfRGOibLCx