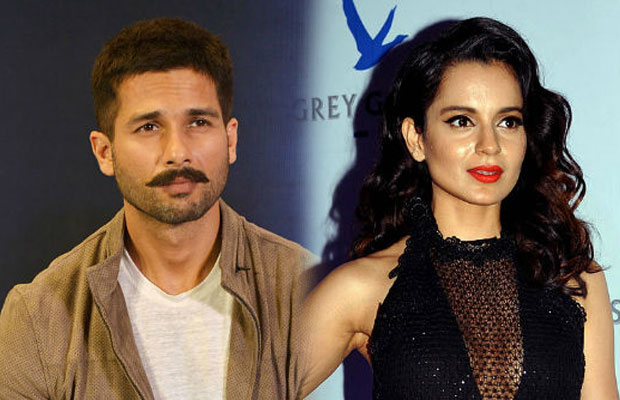 Kangana Ranaut has made explosive remarks at her Rangoon co-star Shahid Kapoor!

Bollywood stars Kangana Ranaut, Shahid Kapoor and Saif Ali Khan have been promoting their upcoming film Rangoon in every quarter of the country. The trio is leaving no stone unturned for the promotions and are seen making controversial remarks. While Saif is making headlines over his son Taimur Ali Khan’s name controversy, Shahid and Kangana have hit headlines over their fight. Rumours had it that Rangoon co-stars Kangana Ranaut and Shahid Kapoor shared cold shoulders during the making of the film. This turned out to be a hot topic during every interview of them.

Both Kangana and Shahid were triggered with the same questions during their interviews and they also came up with some blunt replies. The Tanu Weds Manu actress has never abstained from making explosive remarks, and this time, Shahid Kapoor appears to be the subject of her many controversial statements. From calling him moody to taking a dig at him on doing intimate scenes with her and much more, Kangana has targeted Shahid every way. She even called her kissing scene with Shahid as a “nightmare” and disgusting experience.

Well, Shahid, who loves being away from the controversies took a better and smart move by not reacting to the matter. A leading daily quoted Shahid as saying, “I would not like to play a table tennis match on this whole episode by answering to each of her comments. I just wish to put an end to this match. Kangana should move ahead with all her co-stars in an amicable manner and work with a team spirit.”

This has surely made Shahid Kapoor a bigger person by taking a mature move!