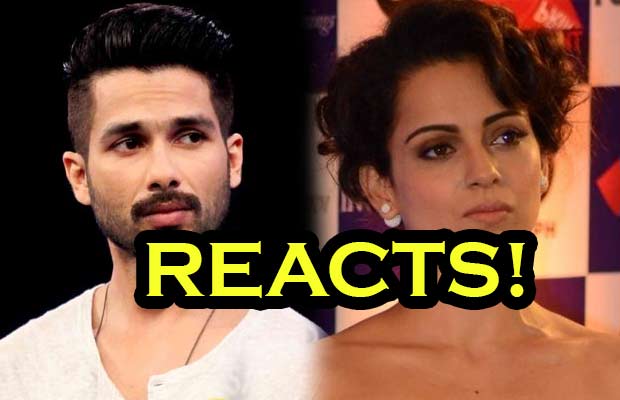 [tps_footer]Bollywood is full of glamour, different mindsets, people, and just like all of us who would love to agree to disagree with each other’s opinions we have our Bollywood stars who also love to disagree with each other’s statements, comments, clarifications and much more.  This time, it’s our chocolate hero Sasha aka Shahid Kapoor who is giving a hard-hitting answer to his Rangoon co-star Kangana Ranaut who is a Queen of controversies. Earlier during an interview, Kangana Ranaut called herself as the third hero of the movie Rangoon and Sasha is not very happy to know this, he has disagreed with Kangana over her latest statement and he said that there is nothing less in being a heroine and it’s not that only being a hero will make you a bigger person on screen.

It’s ultimately the role and the performances that matter, and we do understand the thinking of Shahid Kapoor but we neglect the fact, it’s a male dominated society we live in and even today it’s not easy for any female to make a big mark on her own and it’s easy to give away the credit of success and fame to any man for a woman’s successful career thinking that, oh these two were in a relationship so she became a successful actress and so on. But, nothing is earned without hard work and this is extremely important to understand, Kangana Ranaut has achieved success on her own and unfortunately her words barely pleases anyone. It was reported that Kangana claimed herself as the highest-paid actress of B-Town and she got a paycheck for doing Rangoon just as much Saif Ali Khan and Shahid Kapoor got it.

Once again, our Sasha said the whether a movie is female-oriented or male driven flick the actors are paid on the basis of their current market value and salability, so basically Shahid Kapoor has rubbished both the statements of Kangana over her role in Rangoon and her paycheck too. We all have right to have our own opinions but it’s better to keep our words sweet and good to avoid negativity, we hope Kangana will know this someday.[/tps_footer]