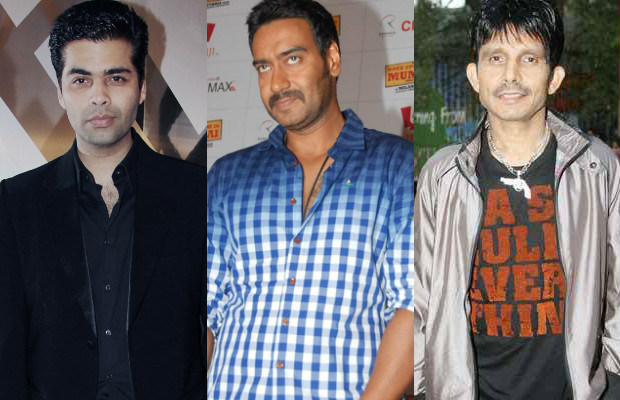 Ajay Devgn is all busy with the promotion of his upcoming film Shivaay, releasing during this Diwali, on October 28. This will also be his second film as a director. The trailer of the film looks exciting and enthralling. Shivaay is clashing with Karan Johar’s Ae Dil Hai Mushkil. People already sensed that due to the clash things are not smooth between Ajay, Kajol, and KJo. This took an ugly turn when all the Kamaal R Khan brawled happen.
Ajay’s manager Kumar Mangat accused KRK of taking a bribe of Rs 25 lakhs from Karan to give a negative review about Shivaay. He even recorded the telephonic conversation he had with Khan and released it to the media. Well, KRK slammed Ajay and Kumar both of unnecessarily dragging him into the clash of their films. At the promotions of Shivaay, the Singham actor was asked about the same.
As per a portal, Ajay says, “It’s really sad that things got ugly. But the idea wasn’t to do that. It was an issue about this man (KRK). I never claimed that it was paid. This man tried to extort money from me saying he got paid. How do I know he got paid? He could be lying! I am sure he must be lying. It wasn’t my fight against Karan but my fight against this man (KRK) who claimed Karan had paid him to promote negativity about my film.”
Ajay further adds, “I was taking a stand that I am not ready to get extorted if this is what he is talking about. So we should not influence such people and promote them in the industry. We should not even write about them because if you do that, then they get mileage.”