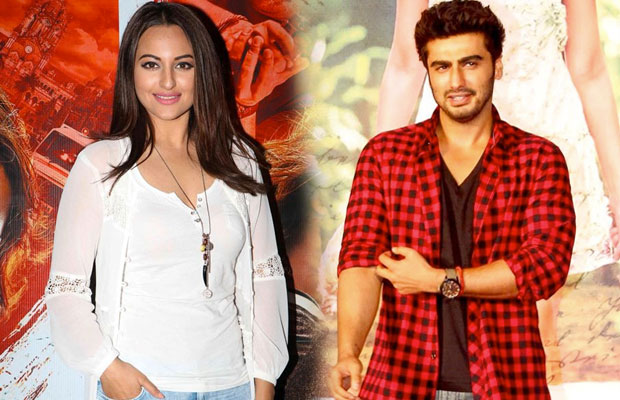 We have had rumors and gossips in between about something brewing between the two stars but it now seems that Dabbang Girl Sonakshi doesn’t wish to work with Arjun Kapoor.

Anees Bazmee‘s upcoming film Mubaraka is all set to go on the floors in the month of November which stars veteran actor Anil Kapoor and his real life nephew, Arjun Kapoor in the movie and has found the leading ladies for the film as well. Confirming the news Anees said, “My heroines in Mubaraka are Ileana D’Cruz and Athiya Shetty. Arjun Kapoor has a double role. So the two leading ladies are cast opposite him.”

Anees spoke on this saying that, “We did approach Sonakshi Sinha. But she didn’t do the film for whatever reasons she might have.”Anees is happy with his cast of Mubaraka. “Anil plays a Sardarji. We’re working on his looks and his accent.”

Further sticking to the movie he said, “The film brings together Anil Kapoor and his buddy Amrita Singh. The two did the popular comedy Chameli Ki Shaadi three decades ago. It’s good to work with artistes of the calibre of Anil Kapoor and Amritaji with whom I’m working for the first time. I promise you, the pair will be a riot.”

Also, this is the first time that Anees will be working on for which he hasn’t written the script for. When asked his views on the same Anees said, “But that doesn’t mean I am blindly shooting whatever has been given to me. I’ve worked on the script for a good 2 ½ months to ensure it is watertight and gripping.”

Oh well, it will be a worth watching news as to what Sonakshi and Arjun react to this!