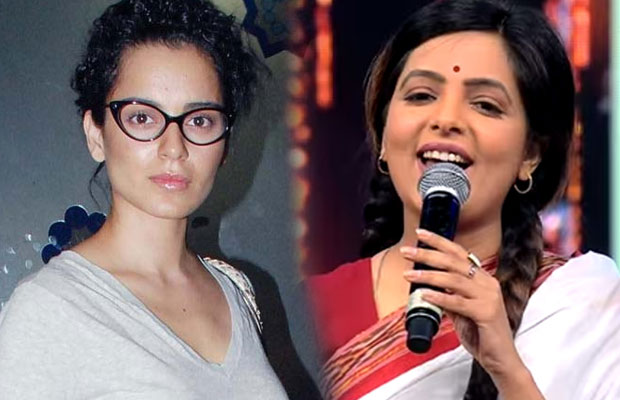 Kangana Ranaut was on the sets of The Voice India Season 2.

Bollywood actress Kangana Ranaut along with her co-stars Shahid Kapoor and Saif Ali Khan has been promoting their upcoming film Rangoon. The stars are seen appearing on various reality shows to promote their film. Recently, Kangana along with Shahid visited on the sets of the singing reality show, “The Voice India Season 2”. Well, being a reality show, the host of the show has to be energetic, humorous and surely apologetic.

Like always, “The Voice India Season 2” comedian-actress Sugandha Mishra, who is also seen on “The Kapil Sharma Show”, was seen entertaining the audience and the little singer contestants at her best. Singers Salim Merchant and Shaan, who are the coaches on the show, started to pull Sugandha’s leg and asked her to mimic Kangana in front of her. As Sugandha is best in doing mimic, she was asked to act like Kangana Ranaut.

Just after Sugandha finished acting her, to which, Kangana said, “I feel like slapping her.” The actress took it on offense and a gave cold shoulder to the comedian-host throughout the show.

This left everyone shocked. It was an awkward moment for Sugandha Mishra also, who was just doing her job of hosting. However, the talented Sugandha showed a good spirit and continued with the shoot.

Known for throwing tantrums on sets, with co-stars and directors, Kangana Ranaut is definitely rubbing people the wrong way. The kind of tantrums and attitude she throws on other people is unacceptable and not worth.