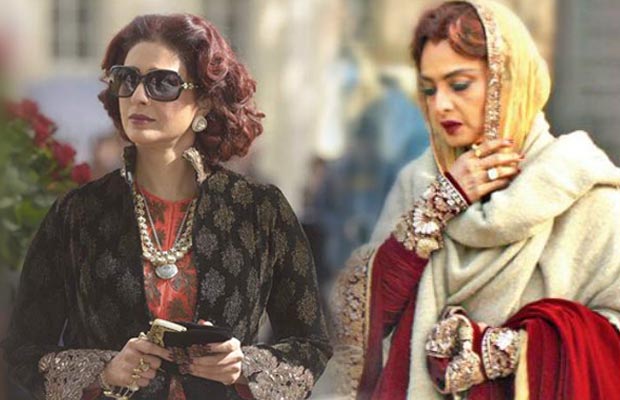 [tps_footer]Katrina Kaif and Aditya Roy Kapur will soon flaunt their unique chemistry in the film ‘Fitoor’. The film has gained much limelight for its change in casts and walk outs. Film ‘Fitoor’ directed by Abhishek Kapoor is an adaptation of the classic novel Great Expectations by Charles Dickens. The movie is gaining all the attention for its star cast of Katrina Kaif and Aditya Roy Kapur.

Abhishek Kapoor’s Fitoor has a very important character of Begum. This character was earlier played by Rekha for the film, but due to some reasons, we heard that Rekha was no more playing the lovely begum in Fitoor.

The real reason for this however has just surfaced. The character of Begum in the film is very similar to what Rekha is in real life and so it was very difficult for her to be playing herself on screen. Rekha realised the similarities between the character and her real life as the film progressed and so decided to opt out of the film.

Who better than the successor of Rekha in real life, Tabu, who we have seen deliver phenomenal performances in the past. Sources say that Tabu has pulled off the same role with much élan.

The similarities between the character of begum and Rekha will be quite evident in the trailer of the film which will be released today (4th January). The character of Begum, which is played by Tabu is a heartbreaker and a seductress which are also the two words synonymous to the real life Rekha. Rekha’s life has been quite interesting which a lot of people don’t know about. She led a very mysterious life and had a couple of relationships some known to all and some unknown. Sources reveal that looking at the glimpses from the trailer, the look of Tabu in the film is also inspired by Rekha.

Film ‘Fitoor’ was the talk of the town lately, when reports stated that director Abhishek Kapoor was not too happy with the love making scene between Katrina and Aditya and wanted to re shot the sequence. Further it was also reported that Katrina was not too keen on re shooting the same.