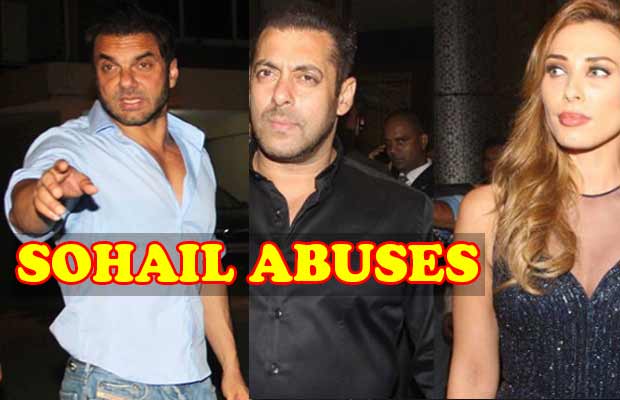 [tps_footer]Each and everyone is waiting to know when their favourite Bollywood star Salman Khan will marry. Since Salman made a public appearance together with rumoured girlfriend Iulia Vantur, it has left fans and the media speculating an impending wedding.

Recently, Salman’s brother Sohail Khan was spotted coming out of an eatery place with Salim Khan and Helen in Bandra. The actor was soon surrounded by the media and not wasting the time, a reporter on duty asked Sohail Khan regarding a buzz about his brother Salman Khan’s marriage with Iulia Vantur. Well, media was shocked with Sohail Khan’s reaction over the same, as he lashed out at media using abusive language.

The actor went top of his voice and abused media, which left many of them embarrassed. In fact, Sohail also asked the photojournalist to shut his camera immediately. Well, we think using such abusive languages is surely not done, as the actor could have walked off silently if he is not in a mood to answer. We think, the reporter, who asked the question was just doing his job.

At the recent event, Salman‘s brother Arbaaz Khan was also quizzed about the same. The actor didn’t deny or confirmed the news but reacted saying that this isn’t the right time to talk about. Arbaaz said, “Well, listen, this (event) is not for that. You think I’m going to answer that?”[/tps_footer]