This article was truly shocking for us! An anonymous user by the name of Indian Fowler published a post on a site called Medium alleging that she was se*ually harassed by TVF founder Arunabh Kumar. After the post went viral, more few women came out alleging that they were harassed too.

An anonymous blog titled ‘The Indian Uber – That is TVF’ reads, “It was way back in 2014 when i first met Arunabh Kumar. I was young and bubbly as i remember. I met him in a small cafe in BKC. He came across as charming fellow. What caught my attention was that he was another man from my same native state- Bihar. Trying to make his foothold in this brutal city called mumbai. The conversation started with what I do where I have grown up and all that. I was 22 back then. Fresh out of a DU college. Trying my hands as a freelancer in production because no one would give me a full time job.

As it turned out, there was one more connecting dot. He came from the same city. Muzaffarpur. So we moved from “Main” to “Hum”. The typical way Bihari’s speak. “Humko Bambai me Bahut Akelapan Mahsoos Hota Hai” His typical response to how the city has been. And then he spoke about his struggles. I was in Awe. They way he had built his startup. And yes, now that i look back at those days, 2.5 years back when startup’s were cool, He looked Uber Cool.

He offered me. And I joined. Trust me, there was nothing better that could have happened to me. Bisht & Singh, Biswa and Arunabh were the one’s who were running the show. Bisht would spend nights getting things done. And i would wonder where is Arunabh in all this. The answer was, he is hiring talent. Yes. He was hiring. Talent or not i dont know. 3 years down the line I know what he was hiring. He was hiring his toys. Yes people this is my story of abuse and molestation.

Day 21- I am abruptly called by Arunabh at 6.45 PM. I am in the local back towards my home. He demands I come back to office. Apparently i have not finished some part of my work. I reluctantly come back. There are 3 people in office. 2 of them leave withing 5 minutes of me coming in. And Arunabh is sitting on a Chair in a casual manner. I walk up to him. He looks at me and asks me — “ Chaturbhuj Sthan ka naam suni ho”? I am stunned. For Non Starters, Chaturbhuj Sthan is the Red Light District of Muzaffarpur. I didnt respond. His second question- “Humko Chaturbhuj Sthan Bahut Pasand Hai. Udhar commercial deals hoti hain. Tum Bhi to commercial deal pe aayi ho”. I was getting where he was leading the discussion to. I avoided an interaction. I said “Arunabh, aap bade bhai hain. Meri tabiyat thodi theek nahi hai. Kya karna hai bataiye. Hum karke ghar jaayenge” He suddenly holds my hand. Says “Madam, thoda role play karein”. I was stunned. None of this was something i had ever asked for. I ran away. Locked myself in the toilet. And cried. He went away. But i was thinking why the hell he is after me? What did i do to make this happen to me. That was the longest night of my life.

2. Since then it became routine. Right from Pitchers to Tripling, i was molested. Be it in parties where Arunabh would try to lift me or would try and fall on me pretending he is drunk. One instance was the Ola deal. The Ola team was meeting him and we were taking notes. He walks out of the meeting with some excuse and calls me for some notes. I walk up. He says its time we do a quicky. I am stunned. And i told him i will go to the police. He says “Police to meri pocket me hai”. I walked out deciding never to come back. Then get a call from Legal saying that I am in a breach of contract. Even my Mom tells me not to fight them. Why? Because a 24 year old girl cant fight an IIT guy with so much of money. He calls up my father and tells him that i am making up stories. Whatever that means.

3. Then begin other set of issues. Start March 2016, I have been back in office. Not seeing him for long, but he wont leave me. He will walk up to me and ask me How do i do. I walk up to my bosses and tell them that i dont want to see him, they would say then walk out. I tell Kasturia that this is what has happened, and he laughs off. Says “Duniya hai. Hota hai” I just wished i could kill myself.

4. The ledge came when Tripling productions start. When KRK would walk in and Arunabh would be acting as a pimp. Apparently he promised him to serve couple of us on a platter. Heard it from KRK. Not a bad guy though. He was honest in it.

I walked out of the place last year. Jobless, Mindless. I dont have much to say. I am not as strong as many other women. I just need my life back. I dont think these guys would let me have one. The constant reminders from their legal on my obligations tells me that i am being tracked.

Arunabh, I know that you know who I am. But then, F*ck you too.”

Earlier, Arunabh Kumar, the CEO of The Viral Fever (TVF), had rubbished the allegations of molesting and harassing women at his office.

In a statement, a TVF spokesperson said, “The article is completely ludicrous and defamatory against TVF and its team. All the allegations made against TVF and its team in the article are categorically false, baseless and unverified. We take a lot of pride in our team and in making TVF a safe workplace that is equally comfortable for women and men. We will leave no stone unturned to find the author of the article and bring them to severe justice for making such false allegations.”

Also, check out how Twitterati have reacted to the same incident and the article that has gone viral on the Internet. 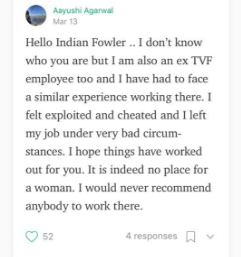 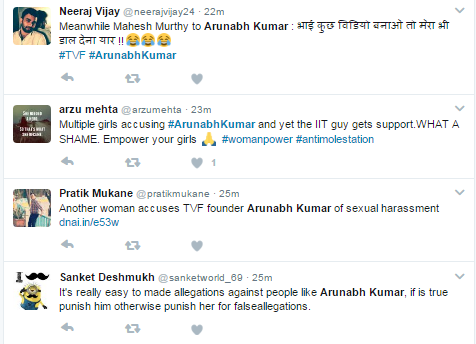 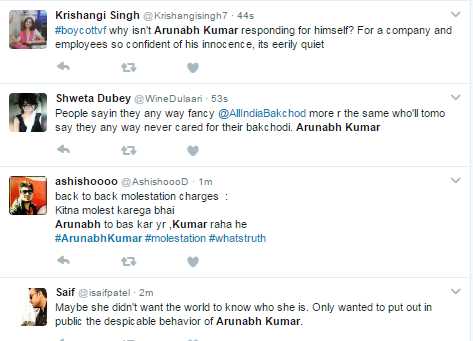