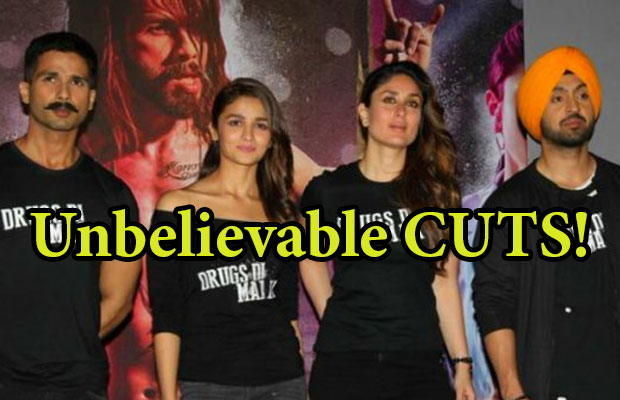 [tps_footer]Udta Punjab has been in controversy right from the time its trailer was out. There were some speculations that the movie might not even release. But now according to the report, the censor boards has given 40 cuts to Udta Punjab. Not only this after 40 cuts, the movie has been giving A certificate. Director  Abhishek Chaubey’s Udta Punjab has Kareena Kapoor Khan, Alia Bhatt, Shahid Kapoor and Diljit Dosanjh. By the film’s trailer, we could make out that it apparently going to be a dark film dealing with drug abuse and its impact on youth.

According to a source, the cuts  include any number of expletives, plus a song.Visuals of substance abuse were also asked to be removed. The film’s leading man Shahid Kapoor is a drug addict and is shown to be a serial abuser. Instead of going to the Revising Committee of the CBFC, producer Anurag Kashyap went straight to the Tribunal in the hope of a hasty clearance with nominal cuts. Now we hope that Udta Punjab has same impact on audience after these 40 cuts too.[/tps_footer]