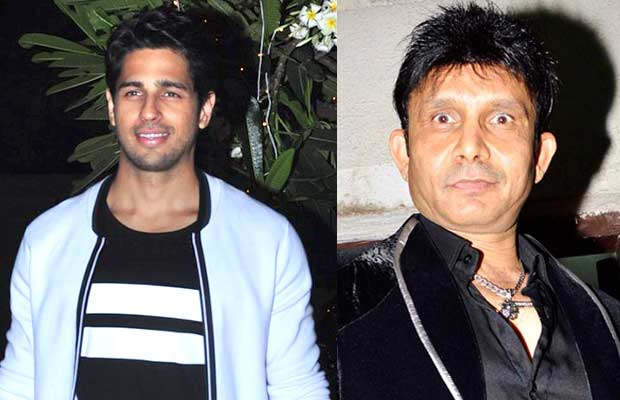 [tps_footer]Sidharth Malhotra is one star who stays away from controversies and wars. The actor who is known for his strict work ethics has nonetheless confessed something shocking about Kamaal R Khan. As we all know, KRK is known for his meaningless views and opinions about various stars and movies. The celebrity who is always active on the micro blogging site Twitter with bizarre comments has upset Sidharth to the core.

Recently, Sidharth Malhotra got into a war of words with KRK, after the latter commented on Alia Bhatt and her bikini clad picture. The dashing actor Sidharth who bashed up KRK on twitter was asked about the same during a recent interview. The talented actor confessed, “It was a built-up of lot many things. He used to WhatsApp me morphed pictures of girls. So it’s a built up of many things. Then again on the same WhatsApp he apologised and said if you got so offended why didn’t you tell me.”

Sidharth Malhotra further added, “I know him since Ek Villain days. We sorted it out. He was impulsive and he did apologize. He is allowed to criticise our movies, but let’s not get personal and pass cheap remarks.”

The evidently irritated Sidharth took matter in his own hands when KRK passed on some unnecessary remarks about Alia Bhatt. The beautiful actress Alia was then asked about how she felt when Sidharth reacted this way for her. The starlet replied, “It was very unlike him and it was quite sweet. I don’t feel the need to pay attention to any of these (KRK) things. I was not even aware of what was happening. But Sidharth had a valid point. If you are a critic, you can say things about our movies but then there is no need to say explicit things about a young girl especially since you are saying that I am so young.”

Alia Bhatt added, “We as film industry and fraternity shouldn’t encourage this kind of dirty and cheap talk especially if you are a girl. Sid was speaking on behalf of many other girls about whom he(KRK) has spoken about in the past.”

On the film front, Sidharth Malhotra will be seen with Alia Bhatt and Fawad Khan in the film ‘Kapoor & Sons Since 1921′ which is all set to hit the screens on March 18th, 2016.[/tps_footer]