Singing brother’s Armaan & Amaal Malik say we should’ve been present to leave the show in between.

Singing brother’s Amaal and Armaan Malik were falsely reported to leave The Kapil Sharma Show in between for which many stories had come up in the press. It was all fake and pale news as the two deny from accepting so.

According to the false news, they were invited along with Sonakshi Sinha for promoting her upcoming movie, ‘Noor’ and co-star Shubani Dandekar was also seen. So the story spices up when Armaan was asked to go and sit with the audience and have a word from there or supposedly make his entry from there.

Which Amaal didn’t like at all and took it as an insult, so the singers decided to just walk out of the show. Also a bit added where, Sonakshi Sinha seemed to be upset regarding the treatment given to Armaan and Amaal Malik.

Both of them wrote about the above in detail on their Facebook posts. Amaal Malik wrote, ‘Just to clarify all the rubbish that’s being spread, I couldn’t make it to#KapilSharma’s show because of some last minute work commitments, & that’s the only reason why I couldn’t accompany Sonakshi & Shibani.

Armaan Malik was never supposed to be on the show anyway so I don’t know where this nonsense is coming from. We have been treated very well on the sets of The Kapil Sharma Show and had an amazing time last time around. Neither me or Armaan were on set this time, so I don’t know how it’s being assumed I walked out of set when I never even made it to the set.

So it’s a sincere request to all the media houses and the people connected to these pages ‘Please don’t drag me into this mud slinging episode, I’m here to make music and yes I will continue to support the truth but there is nothing true about this news.I guess some people are way too bored and are just finding new ways to give more wind to the existing controversy of the Kapil Sharma Show.’ 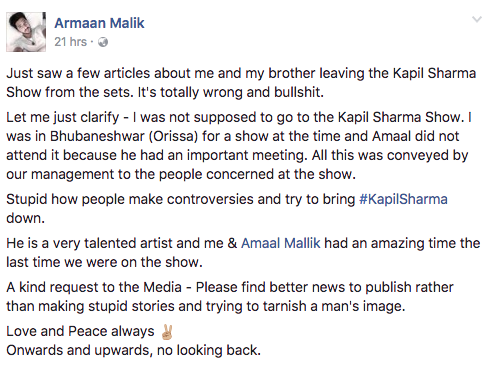 They have been flooded with comments below, stating fans love and that such fake news cannot take up their mind. The brothers have definitely put a pin to this rumoured balloon.