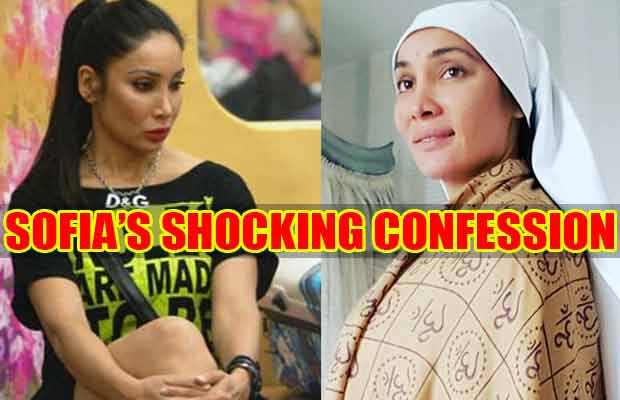 [tps_footer]Former Bigg Boss contestant Sofia Hayat, who is known for her controversial stints, is back in the limelight since last week. The actress, who is known for her bold avatars, flooded her social media account with her photographers as a nun. Sofia had left everyone in a shock after she turned into a nun and is identifying herself as Mother Sofia. Nobody knows the reason why the actress took this step but now claims to be reborn as Mother of the Holy Trinity.

Sofia Hayat, who is currently in the UK, revealed the reason why she turned a nun overnight. Sofia, who was once linked with cricketer Rohit Sharma, says, “The transformation has happened for the most sacred reason, a process which began two years ago.”

“I was in a verbally abusive relationship, where I once tried to kill myself. It was then that I realised that I had almost died, as I could feel myself come out of my body. After coming back to my senses, I went to a healer, who realised that a person, whose body was made of sun, came out of me,” she shares. As bizarre as it may sound, Sofia goes on to add, “I became weak and could only feel ‘pure love’ in my body. It was then that I realised that I had a gift. I was the mother and daughter of the Holy Trinity,” she added.

Talking about giving up acting, Sofia Hayat says, “We are a gift to Mother Earth for a reason and we do not have to look pretty for the same. Makeup is fake and an effort to make us look like what we are not. The same is relevant for acting, which is all about pretending. I will not act anymore in my life, as acting is a false reality.”

Not only that Sofia also talked about giving up the idea of marriage, s** and having children. She said, “I will never have s**, get married nor have children. Since I am the holy mother, everyone’s my children. I have to look after everyone and make sure they know there is no hell. It is heaven that they are living in,” she adds. A changed Sofia doesn’t believe in religion either. “Humanity is my religion. I am neither Hindu nor Catholic. I believe only in love and unity as my religion.”