This morning, Bollywood superstar Salman Khan gave a special treat to his fans by releasing the second teaser poster of his upcoming film, Tubelight. The first poster saw Salman Khan showing his back and the second poster sees the actor saluting in an innocent look.

Featuring Salman Khan, the second poster sees the actor in an innocent look with shoes dangling around his shoulders. The poster also sees a war scene right below Salman Khan’s shot. Well, Salman is not the only highlight of the poster. Yes, the war scene below also sees his brother Sohail Khan running with a gun. 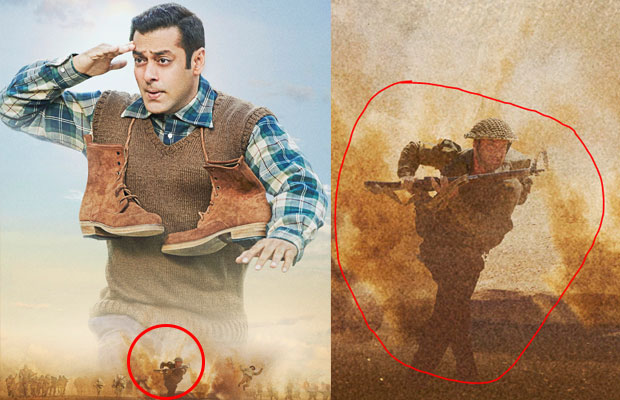 Also, the another interesting thing about the poster is that this look of the actor somewhat reminds us of Salman Khan’s character from Bajrangi Bhaijaan. The Being Human star had the same dressing style in Bajrangi Bhaijaan too, as we see now in Tubelight poster. Don’t you think?

Salman Khan took to Twitter and captioned the poster as, “Peace, Respect, Love and Light in your life from the Tubelight team.

Peace, Respect, Love and Light in your life from the Tubelight team . pic.twitter.com/BXjkn0Xc9m

Also, take a look at the first teaser poster of the film, in case if you have missed it.