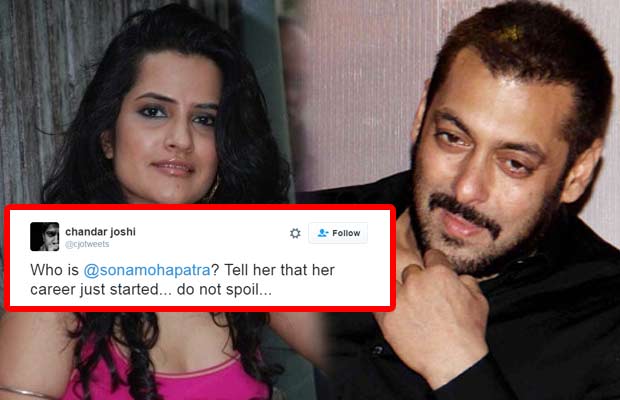 [tps_footer]Just a few weeks before the release of Sultan, Salman Khan found himself in a soup as he blatantly made an extremely insensitive comment about his shot and ended up being labelled as a sexist!

This comment has triggered a lot of animosity and negativity over social media, especially Twitter. Of course, the women are flocking in numbers, agitated and pissed with such a comment. In between all this, Sona Mohapatra tweeted about this and she expressed her disgust at Bhai’s insensitive talk. Sona also tweeted the picture of Hrishikesh Kannan who claimed that the allegations against Salman were false and that he was misquoted. On the other hand,  Sona held the opinion that despite all the charges against Salman, people still look up to him as a heroic figure!

All this and outburst people in twitter slamming and abusing Sona in the filthiest manner possible. Right from derogatory abuses to her chastity, everything was put to question. The hate just did not stop at that. The funniest part is , most of the people abusing her left and right did not know who she was!

But Sona Mahapatra being the outspoken woman who doesn’t give two hoots about haters, slammed everyone at one go with this tweet which read :

You continue to prove my point with every perverted, sick, cheap message you write to me. HaHa”

Dear Bhai Chamcha’s,
You continue to prove my point with every perverted, sick, cheap message you write to me. HaHa pic.twitter.com/9lZAcydfHs

Way to go Sona. Burn them down!

Dear @sonamohapatra , idols of 20-30 fans ? ! Teach yourself how to respect the biggest of superstar of country !

@sonamohapatra . madamji Dabang khan is after all human being who make mistakes but Y publicity stunt. U want Bollywood break or sell song!!

Instead Of Being busy trying to Gain as Much of Cheap Mileage as You Can Outta One’s Slip of tongue! You’ve had Enough! @sonamohapatra

Dear @sonamohapatra If u r calling us Chamchas then i admit we r but u should also admit u r doing it for publicity! Read his full statement

Who is @sonamohapatra? Tell her that her career just started… do not spoil…

@sonamohapatra I used to hear your one song ambarsariya that is also gone now…never gonna hear any song of you from now onwards ?