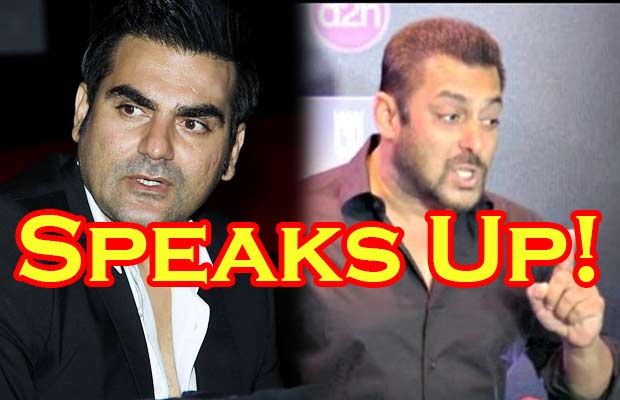 [tps_footer]So the recent storm over the internet is definitely Salman Khan‘s inappropriate comment and women are going crazy about it, so is the media! At a launch of his film ‘Jeena Isi ka Naam hai’, Arbaaz Khan had to deal with the wrath of the people as he tactfully tried to release the tension in the air. He did it with great poise and diplomacy we must.

Let’s see what the younger brother has to say : “Somebody asked me this today and I just want to say, not every incident that happens with Salman I am supposed to be answerable to that… Is Salman getting married, who is his girlfriend… He is a 50-year-old man who says what he wants to the media and lives his life… There are some things which we say while talking but we should look at the intention, why was it said. I definitely have no doubt that whatever Salman said, the intention was not wrong. It was just the kind of (statement) where we compare things… ‘I worked like a donkey’ so now people will say you used the word donkey so some animal activist will come after you. Sometimes you say something out of context, your intention is not wrong but if you desensitise it and become over sensitive about it then you can create an issue over anything.
He also added :”I am sure Salman must have realised the comparison he did was not may be appropriate and for that, if he feels he needs to apologise, he will apologise or not, why are you asking me whether he should or not. I don’t think it’s fair… It is his issue, if you get an opportunity to ask him then ask him but I shouldn’t be saying… I think, maybe, he has said something out of context and if he has said it by mistake, maybe he should probably give a justification. But I don’t think I am entitled to make a comment and say ‘he has to apologise’.
….I would hope that he gives a clarification for whatever, because a controversy has been created. So jawaab dena banta hai, because people look upto him, he has got a lot of following, he is a youth icon. So if he has made a staying that doesn’t look very appropriate, then maybe in time he will give a statement. Salim saab is the father… Sometimes a person also apologise when somebody is hurt. ‘It’s okay, it’s not my fault but if you felt wrong, I apologise’. If you apologise Every time doesn’t mean you are genuinely sorry for what you have said or done. Sometimes because you have hurt somebody’s sentiments, said something that is not so appropriate, you apologise.”

Well, at least Arbaaz knows how to tackle the situation without spilling the soup![/tps_footer]