Sonam Kapoor garnered a lot of appreciation both from the audience as well as the critics for her latest movie ‘Neerja’. This Ram Madhvani-directed film on a brave hearted airhostess, who saved many lives during a hijack, didn’t help Sonam this award season to decorate her award shelf. Most awards were given to Alia Bhatt for her terrific performance in ‘Udta Punjab’.

Finally, her day has arrived. The fashion diva received a Special Mention for her role in the film at the 64th National Film Awards. Sonam Kapoor’s rumoured boyfriend Anand Ahuja is obviously proud and can’t stop himself from declaring his happiness and pride for his lady love. He wrote a wonderful message along with a poster of the film on his Instagram profile.

Anand took to Instagram to say, “‘The meaning of life is to find your gift. The purpose of life is to give it away.’ #PabloPicasso … To @sonamkapoor , the purest exemplification of selflessness, contribution, thoughtfulness, love and care. Many congratulations to you and everyone around you, encouraging (and challenging) you to become the person you are. @kapoor.sunita @anilskapoor @rheakapoor @harshvardhankapoor #gr8likewhoa #everydayphenomenal (sic)” 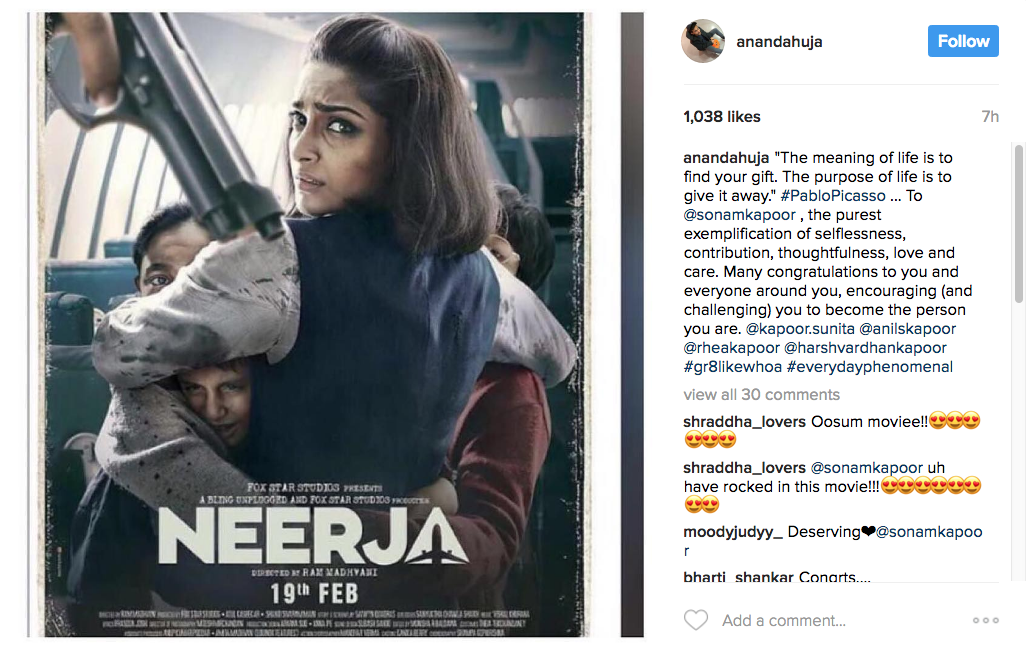 Anand has been spotted at multiple family occasion along with Sonam and her family. Last month, he was in London to celebrate Sonam’s mother’s birthday. The grapevine is also buzzing with the news that the two will get engaged soon!

Isn’t that super cute!? Though the two have never openly spoken about their relationship, there is a lot of public display of affection that keeps happening every once in a while.