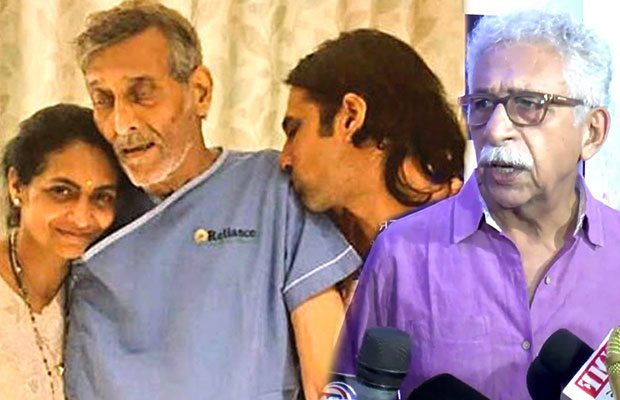 After the news of veteran actor-turned-politician Vinod Khanna being admitted to hospital after suffering a bout of “severe dehydration”, a picture surfaced on the internet where Khanna looked very frail and weak, almost unrecognizable. Naseeruddin Shah, who is a colleague of Khanna was asked about how he felt about Vinod Khanna’s health especially about the viral picture.

Shah was recently present at the launch a book by film archivist P.K. Nair. Shah, who has starred alongside Khanna in movies like Rihaee in 1988 also starring Hema Malini, was asked about Khanna’s frail health.

Shah dismissively said, “Relevant questions only” and walked away.

Shah’s reaction can be owed to the fact that there has been no official confirmation by Vinod Khanna’s family.

The book launch was by the Film Heritage Foundation, the country’s only non-government film archive.

Nasseruddin Shah termed it as “A special book that begins from the magical experience of Nair-saab watching his first film when he was eight; his incredible efforts in rescuing the early works of Phalke and his obsession for collecting and preserving films for posterity. I think it is wonderful that Film Heritage Foundation is keeping his memory alive by publishing this book as his contribution to Indian cinema is immense and should not be forgotten.”

Film Heritage Foundation was established in 2014. The foundation is dedicated to supporting the conservation, preservation, and restoration of the moving image and developing interdisciplinary educational programs that will use films as an educational tool and create awareness about the language of cinema.