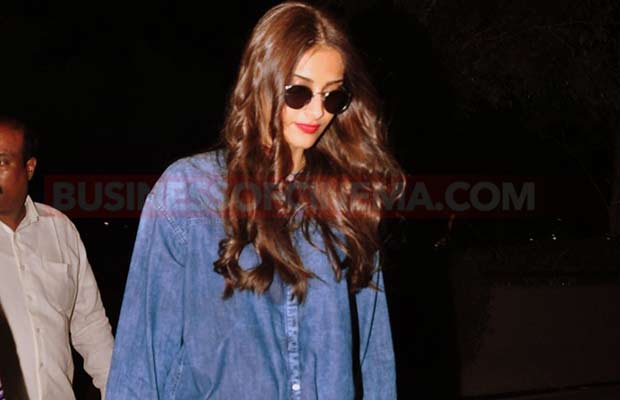 [tps_footer]Sonam Kapoor has worked really hard to earn the title of ‘Bollywood’s Fashionista’. The once overweight teenager has quickly risen through the ranks and shed the excess pounds to become one of the most stylish women in the country. Be it her appearances at red carpet events like the Cannes Film Festival, Award shows or just when she is promoting films – her style quotient is always high.

The best news for fans of the ‘Neerja’ actress is that the young lady was recently spotted at Mumbai airport. The Kapoor girl was all set to take a quick flight to London to take care of a few professional commitments as well as enjoy herself. Sonam has been working really hard for the past few months and looks like London will be the perfect destination to unwind and have some fun. While it is not clear if Sonam has lined up any vacation-like plans in London, we’re sure she will make the most of what the city has to offer.

However, what caught our eye was the immaculately casual airport outfit Sonam chose as she sashayed to her flight. Sporting a dark blue and light blue denim ensemble, Sonam looked pretty amazing. The outfit choice could be called daring since wearing shades of the same colour is a trick that not many can carry off with ease. But being the total Queen that she is, Sonam carried off the outfit without breaking a sweat and paired it all with a pair of awesome sunglasses. Well, we hope Sonam has the time of her life in London and that she comes back even more stylish![/tps_footer]