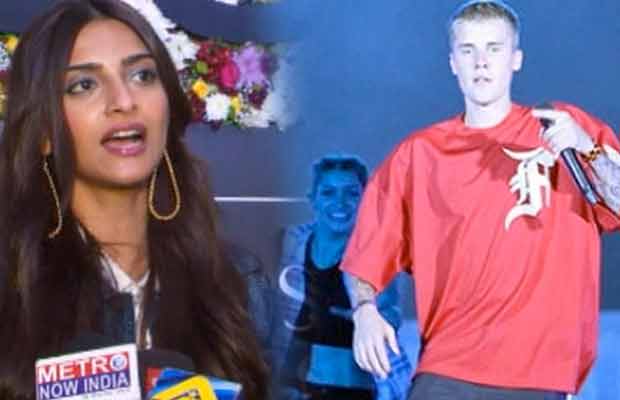 Sonam Kapoor replies on being asked about her views on Justin Bieber lip-syncing in his concert.

The Canadian Singer, Justin Bieber had come to Mumbai for his Purpose Tour Concert on May 10 that happened at the DY Patil stadium in Nerul, Navi Mumbai. The excitement and madness among the fans was building with each passing minute. And not only commoners, even our B-town celebrities were looking forward to the big concert, which was a talk of the town.

But after the concert, there were Bollywood stars like Sonali Bendre and Bipasha Basu, who did not find it upto the mark. While the former called it a sheer waste of time, the later found the venue too crowded.

Even the fans of the pop star were left disappointed when they all got to know that the singer is just lip syncing and not singing LIVE at the concert. They felt cheated as many of them had paid as much as 76000 for a ticket to the concert!

Apart from those who attended the gig, there were reactions from those celebs as well who did not go for it. The latest one is from the Bollywood actress, Sonam Kapoor.

Sonam was at the launch event of her new fashion label, Rheson. At the same event, she was asked upon by the media about her views on Justin lip-syncing in his show and not singing live. To this, the actress curtly responded by saying, “We are only talking about Rheson today.”

Sonam Kapoor is currently shooting for Twinkle Khanna’s debut production venture PadMan. After this, she will be joining Kareena Kapoor Khan and Swara Bhaskar for her sister, Rhea Kapoor’s film Veere Di Wedding.

Watch Video Justin Bieber Swears At His Fans In India