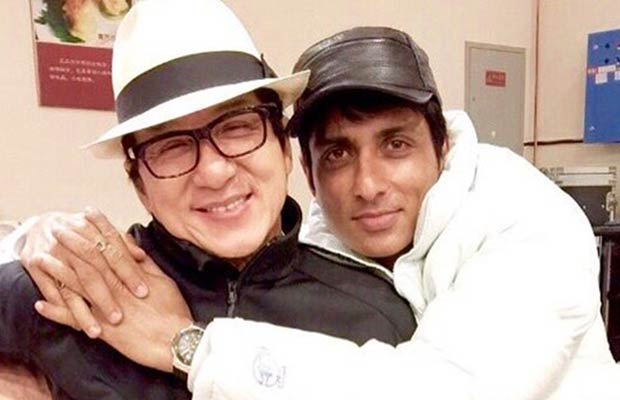 [tps_footer]Most of us have admired Bruce Lee, Jackie Chan for their hardcore action packed movies. But Jackie Chan always maintained a different kind of genre in Kung Fu movies. He has always mixed fights with hilarious comedy timings, expressions, reactions and even funny moves to confuse his opponent. No one can replace Jackie Chan ever. He has surprised us with his Kung Fu style and has made us laugh endlessly with his style of comedy.

Jackie Chan‘s movie Kung Fu Yoga is a part of the three-film agreement signed between the two countries during Chinese President Xi Jinping‘s visit to India. And, initially Aamir Khan was approached by Jackie to be a part of this movie but it didn’t work out and even Katrina Kaif couldn’t be a part of it. But successfully, Sonu Sood and Amyra Dastur became a part of this international project and recently, Amyra even received a farewell cake from Jackie on the last day of schedule in Iceland. And now we have the confirmed news from Sonu Sood himself, that very soon Jackie will shoot in India and later move to Beijing for shooting different schedules of this movie in different countries.

Just like many superstars, Sonu was also a part of TOIFA 2016 at Dubai and he shared in an interview, “I am going to join him next week in India and then we are going to Beijing…October release. Fingers crossed. Jackie will be coming to India and will be coming to India on the 21st. He will be staying for 15 days. Jackie will be staying in Jaipur.” He was full of excitement when he revealed this and he just couldn’t stop gushing over the sweet, polite and humble nature of the Legendary actor Jackie Chan.

We are looking forward to see Sonu Sood, Amyra Dastur to make it big in the West after Priyanka Chopra and Deepika Padukone have been roaring with success and appreciation worldwide and not just India and West.[/tps_footer]